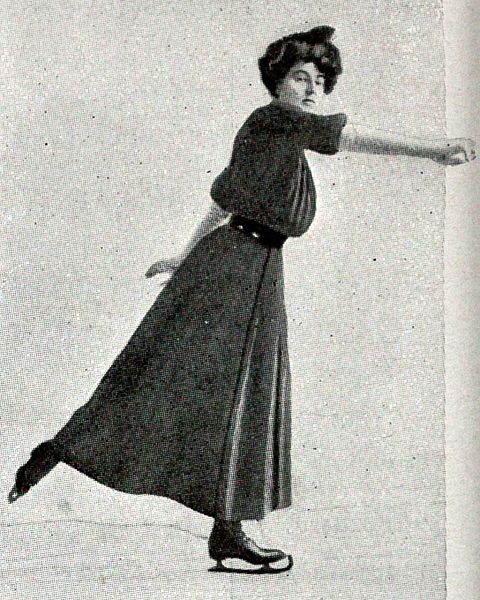 We are now used to there being male and female versions of many sports; women’s football, women’s athletics and so forth. But in the very early part of the 20th century the remarkable Madge Syers realised that the International Skating Union’s rules did not specify the gender of competitors and single-handedly changed her sport.

Florence Madeline (Madge) Cave was born in London in 1881, one of 15 children of Edward Cave, a bankrupt property developer and builder, and his wife Elizabeth. Madge was already a talented swimmer and horse woman before taking up the sport of ice-skating.

Aged 18, Madge was introduced to the less rigid International Skating Style by Edgar Syers, who would become her coach, husband and skating pairs partner. Competing in the 1902 World Championships would not have happened without Edgars active and vocal support. It also helped that she and Edgar were both influential members of Britain’s National Skating Association who were hosting the World Championships

The World Figure Skating Championships were regarded as an all-male event since competitive skating was generally viewed as a male activity but, as Madge discovered, there was no regulation which actually prevented women competing and while there was opposition to her taking part, her registration was reluctantly accepted.

Madge took part, dressed in a full length skirt, satin blouse, pearl necklace, hat and leather gloves! A far cry from the skimpy costumes of today’s female skaters. She competed against four men and was only bettered by one, the eventual ten time World Champion Ulrich Salchow. In fact it could have been even better if reports collected at the time are true as many felt Syers had outskated Salchow. Indeed it is said that Salchow himself felt that Madge had skated the better and is said to have offered her his gold medal.

Following Madge’s success at the 1902 World Championships, the International Skating Union, who ran the sport, discussed the subject of women competing against men at their 1903 Congress. They decided that the dress of a woman prevents the judges from seeing her feet; that a judge might judge a girl differently if he was “attached” to her and that it is difficult to compare women with men. Unsurprisingly for a sport run my men, the Congress voted six to three in favour of barring women from future championships.

While Madge couldn’t argue against two of the points raised at Congress she could overcome the dress objection and shorted her dresses to a mid-calf length to show her skates fully. Madge continued to compete , winning the British Figure Skating Championships title against a mixed field in both 1903 and 1904. Her persistance and continued success when competing against the men kept the issue of women in the sport in the spotlight and with the active support of Great Britain’s National Ice Skating Association a separate event was created known as “the Ladies’ Championship of the ISU”. Madge won the first and second ladies titles and when figure skating entered the Olympics, in London, 1908 Madge won gold in both the compulsory figures and free skating and took a bronze medal in pairs skating with her husband Edgar.

After the 1908 Games, Madge retired from figure skating due to ill health but was still active in the world of skating. She co-wrote “The Art Of Skating (International Style)”, which was published in 1913.

Madge was elected to the World Figure Skating Hall Of Fame in 1981.