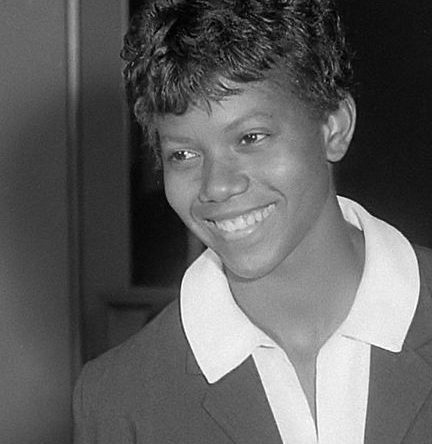 In Rome, 1960, Wilma Rudolph became the first American woman to win three gold medals in track and field during a single Olympic Games.

Wilma’s early life did not hint at the life to come as the fastest female athlete on earth. She was born the 20th of her father’s 22 children across two marriages. Aged just four she contracted infantile paralysis which caused severe twisting of the leg and foot and meant that she wore a brace on her left leg until she was nine and an orthopedic shoe for support of her foot for a further two years. By the time she was twelve she had also survived bouts of polio and scarlet fever. Yet by the time she was sixteen, she was a member of the U.S. Olympic team which competed at the 1956 Melbourne Games, returning with a bronze medal that she had won in the 4 × 100 m relay.

Wilma didn’t start out as a track and field star, rather competing for her high school basketball team. Standing 5ft 11 inches tall Wilma was a natural athlete and became an all-state basketball star player, setting a state record of 49 points in one game. She was spotted by athletics coach Ed Temple and trained in track and field with him at Tennessee State University. Wilma took to athletics as she loved to run, saying, “I don’t know why I run so fast, I just run.”

At the Rome olympics, Wilma won all three Olympic sprint gold medals; the 100m, 200m and 4 × 100 m relay. In the semi-finals of the 100m she equalled the world record time of 11.3 secs and in the final recorded a wind-assisted 11.0 seconds. In the heats of the 200m she broke the Olympic record by completing the distance in 23.2 seconds. The gold medal in the relay was as part of the US team that broke the world record by recording a time of 44.0 seconds.

After the Games, Wilma was lauded across the world and made many television appearances. In the press she was known as the fastest woman in history, “The Black Pearl” and “The Black Gazelle.” She was voted the Associated Press Female Athlete of the Year in both 1960 and 1961. Fans flocked to see her run and one time, in Berlin, fans threw their shoes at the team bus to gain her attention and to get her to wave.

She retired from competition not long after the Games, aged just 22, and went on to teach, coach, run a community centre and was U.S. goodwill ambassador to French West Africa.

Wilma recorded her story in her autobiography, Wilma, which was turned into a TV film in 1977. In the 1980s, she was inducted into the U.S. Olympic Hall of Fame and established the Wilma Rudolph Foundation to promote amateur athletics, something she said was her greatest achievement.

Having battled illness in her early years she lost her battle with cancer aged just 54.

Wilma once said, “Winning is great, sure, but if you are really going to do something in life, the secret is learning how to lose. Nobody goes undefeated all the time. If you can pick up after a crushing defeat, and go on to win again, you are going to be a champion someday.”