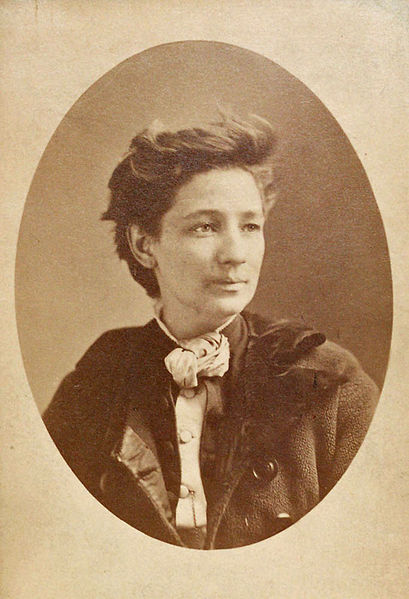 Victoria Woodhull was an advocate of free love. Not the 1960’s version of Californian beaches and Woodstock, but the freedom of women to marry, divorce, and bear children without government interference. In the mid 1800’s this was every bit as challenging to the establishment.

For someone who would later stand for President, Victoria’s beginnings are surprising. She was born in 1838, one of 10 children of an impoverished Scots/American family. Her mother was a follower of spiritualism and her father was a con man and snake oil salesman. When the family were forced out of their home town, as a result of a failed insurance scam by her father when he burned down the house to try and get the insurance money, the young Victoria was forced to travel in his painted wagon and work as a revivalist child preacher, faith healer and a fortune teller.

Aged just 15, Victoria was forced into the first of three marriages; to a man who was practising as a doctor, though untrained, and who was an alcoholic and womaniser. Victoria had two children by him but eventually sued for divorce. In the 19th century women were bound to stay in a marriage, however they were treated. Divorce was scandalous and the few women who were able to escape were shunned by society, a prospect hardly likely to have worried Victoria! As a result of her own experience, then, Victoria decided to campaign to give all women the choice to leave unbearable marriages. She is reported to have said that, “I have an inalienable, constitutional and natural right to love whom I may, to love as long or as short a period as I can; to change that love every day if I please, and with that right neither you nor any law you can frame have any right to interfere.”

Victoria soon remarried, to Colonel James Blood, a civil war hero and ardent spiritualist who belived he could commune with the dead, and moved with him to New York. James Blood was also a political radical who encouraged Victoria, and her sisters who also moved to New York, in their pursuit of women’s rights. Victoria and her sisters worked as spiritualists, and deliberately set out to meet railroad and shipping magnate Cornelius Vanderbilt, one of the richest men in America. This they did and so charmed Vanderbilt that he set the sisters up in the brokerage business! Woodhull, (Victoria retained her first husbands name) and Claflin (her sister Tennessee retained the family name) opened on Broad Street in 1870, making it the first stoke brokerage to be owned and run by women.

They made a fortune on the stock exchange and used some of the money they made in the brokerage business to start a newspaper, Woodhull & Claflin’s Weekly. At the same time Victoria became increasingly interested in the work of Karl Marx and it was their newspaper that published the first version in English of Karl Marx and Friedrich Engels’ Communist Manifesto. Equally contraversially, the newpaper supported all aspects of feminism and equality including sex education, free love, women’s suffrage, and licensed prostitution.

Having spoken out against the fact that the goverment of the USA was composed entirely of men, Victoria, then aged just 34, went on to declare her intention of standing as a candidate for President and was nominated by the newly formed Equal Rights Party on May 10, 1872. This was almost 50 years before the ratification of the 19th Amendment gave women the right to vote, so Victoria couldn’t even vote for herself!

A few days before the presidential election, Victoria, James and Tennessee on charges of “publishing an obscene newspaper” – based on a series of articles which exposed a senior clergyman as an adulterer. They were held in jail for a month and so she wouldn’t have been able to vote even if women had the vote!

Victoria divorced James and, using money given by Vanderbilt’s son, she and Tennessee moved to England. Here she married for a third time. Under her married name, Victoria Woodhull Martin, she published the magazine, The Humanitarian.

When her husband died she retired to the country. She died aged 88 and a monument to Victoria Woodhull-Martin is located at Tewkesbury Abbey.