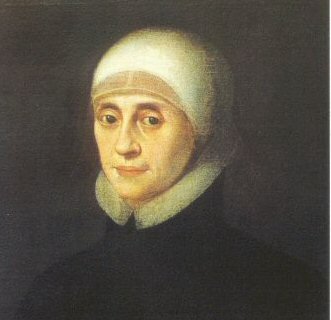 The wiki entry for Mary Ward starts “Mary Ward (nun)”. True, Mary was a nun, indeed she founded the Sisters of Loreto and is being recommended for sainthood, but she was not the kind of nun that stayed indoors praying for the world. Mary was a feminist activist who petitioned for change!

Mary Ward was born in 1585, a time of great conflict for Roman Catholics in England. It was the height of the Roman Inquisition and two of her relatives were involved in the Gunpowder Plot. In 1595 her family home was burned to the ground in an anti-Catholic riot. She was from a priveleged background, staying with, amongst others, Sir Ralph Babthorpe but Mary and her family spent much of their life on the move or on the run.

Aged 15, Mary joined an order in Saint-Omer, northern France, from where she founded a new monastery for the Order, specifically for English women.

At that time, the work of religious women was confined to what could be carried on within the walls of a monastery: teaching boarding students or nursing in hospitals attached to the monastery. This was not good enough for Mary and, aged 24 and with support of the new Order, she opened schools for girls. To us here in 21st century, this seems like an uncontroversial move but in the 17th century it was revolutionary. Even more so was not wearing a religious habit and not conforming to the jurisdiction of the local bishop! She also encouraged women to perform in plays. Again, nothing surprising for 21st century women, but this was considered scandalous in Shakespearean times, when all female roles were played by boys. In her work and that of the Order, Mary insisted that all must be treated with the same charity, from the rich to her employees and the poor. And, importantly, Mary believed in education for girls and the right of women to play an active part in their society.

For 20 years she led the order in defiance of the strict rules set by The Vatican. By 1631, Mary decided that she would petition the Pope in person to plead on behaf of her Order. Aged 46, she walked more than 1,500 miles to Rome. Pope Urban threw Mary in jail and issued a papal bull ordering her movement to be suppressed. Although Mary was repeatedly imprisoned for her faith, she continued to appeal to the Pope on behalf of the Order. Mary was even arrested by the Inquisition as a heretic.

During her life she travelled throughout Europe, founding schools in the Netherlands, Italy, Germany, Austria, Czech Republic and Slovakia. Finally a Papal order was issued to destroy the Institute and her schools were closed down. Her work was destroyed and the Order scattered across Europe.

In 1639 Mary returned to England and established herself in London. Once again Mary did not settle for an enclosed, contempative life, instead she established free schools for the poor, nursed the sick and visited prisoners. In 1642 she travelled to York and established a convent at Heworth. She died in the siege of York during the English Civil War and is buried at nearby Osbaldwick Churchyard.

After her death and in the centuries that followed, English nuns persuaded various popes to lift the suppression on the order but the Popes agreed to do so only on the condition that Mary Ward was not recognised as its foundress. As late as the 1900s, more than 300 years after her death, a French member of the order, Sister Magdalen Gremion, asked Pope Pius X to restore Ward as foundress. Pius not only refused but denounced Ward as a heretic!

His successor, however, thought differently and in 1932 Pope Pius XI opened Ward’s cause for sainthood. Pope Pius XII went further, calling Mary an “incomparable woman” – and so she is!