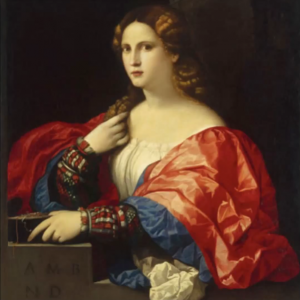 Francesca Caccini was an Italian Composer, singer, lute player, poet, and teacher of the early Baroque era. She was also known by the nickname “La Cecchina” The Song Bird. She is believed to have been a quick and prolific composer, equal in productivity to her colleagues

Francesca was born in Florence in 1587, the daughter of Giulio Caccini. Little is known about Francesca Caccini’s education, but it must of been of high quality as she could sing, play keyboard, guitar and harp. It is clear that she learned Latin and studied literature as she wrote Italian and Latin poetry in later life. Indeed, Caccini’s biographer reports that at age 12 she wrote a commentary on books 3 and 4 of the Aeneid!

In 1600 Giulio composed music for the wedding of Henry IV of France and Maria de Medici. Francesca, and the whole family, visited France for the wedding and when she sang at the wedding, Henry declared her to be “the best singer in all of France”. Henry wanted her to stay in France but she returned to Florence to teach and later become a musician, a voice teacher, in the Medici Court. Here receiving both a salary and a dowry from her patrons, the dowry enabled her to marry a fellow singer at the court, with whom she had a daughter, Margherita. After just four years of marriage her husband died. Less than a year after his death Francesca remarried remarried. Her second husband was an aristocrat and a landowner and the couple settled in his hometown of Lucca. Together they had a son, Tomaso. When her second husband died Francesca was left a wealthy woman a wealthy woman. She decided to move from Lucca and returned to the Medici Court where she resumed her former duties.

She was one of the best-known and most influential female European composers between Hildegard of Bingen and the composers in 19th century.

Her early songs were influenced by her father but in general her style has been likened to that of the much better known male composer, Monteverdi. She composed madrigals, canzonettas and her composition of vocal music was brilliantly rendered in trills and ornamentations. She wrote for all moods, from laments and sacred songs to joyful romantic ballads in both Italian and Latin. In her time her extraordinary talent in music was well recognized by other great musicians of her time.

Very little of her music survives. Her most famous works include, ‘Il primo libro delle musiche’, a collection of thirty-six solo songs and soprano-bass duets dedicated to her patron the Cardinal de’ Medici Most of her stage music was composed for performance in comedies by Poet Michelangelo Buonarroti The Younger (grand-nephew of the artist) such as ‘La Tancia’ (1613), ‘Il passatempo’ (1614) and ‘La Fiera’ (1619). Her stage work, ‘La liberazione di Ruggiero’, written to celebrate the visit of Prince Wladislaw of Poland, is considered to be the first Opera by a woman composer. The libretto is based on the epic poem Orlando Furioso by Ludovico Ariosto, which would have been well known at the time. The importance of the work is reflected in the fact that premiere performance ended with a ballet for 24 horses and riders!