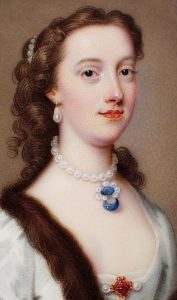 Margaret Cavendish, Duchess of Newcastle-upon-Tyne was born in Essex in 1623, the youngest of eight children. Although not titled, her family was wealthy and she did have a tutor.

Amazingly for the age in which she lived, she published under her own name and was a prolific author. It is said that she was a poet and philosopher, as well as writing romance, essays and plays. Not only that, she wrote about topics which included gender and science. She had published a book called ‘The Blazing World’ which was an early example of science fiction.

Her interest in early science took her to the Royal Society where she was the first woman to attend a lecture there. She also is known to have had discussions with the leading philosophers of the time including Hobbes and Descartes.

She lived through the English Civil wars and indeed her brother was executed for treason as he was a commander for the cavalier army.

She met her husband , William Cavendish, Marquis (later to become Duke) of Newcastle in France where he was in exile as he was a royalist. On his return to England he found that his estate had been sequestrated but was able to pay a fine and promised not to raise arms against the parliament, in order to regain it after he and his wife had suffered some hardship.

She wrote her memoirs and indeed stated freely that her reason for writing was to achieve fame and also to take her away from what were considered appropriate pastimes for upper class women of that time.

She was thought to be eccentric because of her lifestyle and her odd fashion sense and was therefore nicknamed ‘Mad Madge’.