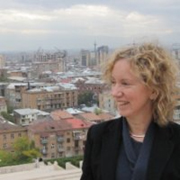 In 2015 we featured the work of HERA, a charity which gives women survivors of trafficking, conflict, and other forms of violence, control over their futures – has launched its first crowd funding campaign. We are delighted now to be able to interview inspirational CEO, Lynellyn Long, founder of HERA

1) What inspired you to set up HERA?
As Chief of Mission for the International Organisation for Migration (IOM) in Bosnia Herzegovina from 2000-2002, I was in charge of the largest counter-trafficking programme at the time.  Given the demand for trafficked women from UN Peace Keeping troops, contractors, and local mafia, Sarajevo was both a destination and major transit point for trafficking from Central and Eastern Europe and Asia into Western Europe and North America.  In one year alone we repatriated over 400 women primarily found in the local bars and brothels but there was also a major open air market for selling women in Eastern Bosnia.  The women came primarily from Romania, Moldova, Ukraine, Russia etc. but also as far away as Kazakhstan and Azerbaijan.  Some 400 women trafficked in one year to and through Bosnia.

We provided shelter and return tickets to their home destinations but I realised that we were returning many to the same conditions that has caused them to be trafficked in the first place.  The first woman whom I interviewed in depth was a young Romanian with a MBA (or masters) in Economics.  She had worked for a British Bank in Romania and had been laid off due to cutbacks.  Working through a recruitment firm (which turned out to be fake), she believed she was obtaining a post at a bank in London.  The recruitment firm was quite sophisticated and asked for her references and transcript and held an interview – so all seemed quite legitimate. Instead she was trafficked to Sarajevo and forced to work in a brothel providing sex sometimes to four to six men daily.  She told me that she no longer trusted the corporate world and that she was returning home to start her own business.  That is where I came up with the idea for HERA.

We started with two cohorts in Belgrade (which had become the main crossroads for trafficking throughout the region).  From the first two classes, I realised how relevant “entrepreneurship training and mentoring” were.  The women themselves had to be entrepreneurial to survive these experiences.  It worked best if they built on their “survivorship skills” in terms of their ability to reconnect and feel validated again.

Also, we discovered in the first two years how important mentors were for helping the women develop their ventures and other careers again and to reintegrate into the formal economy.

However, when the Serbian Government declared that there was no trafficking in their country and it became unsafe to run the programme there, we realised that we were being hypocritical not to address trafficking in our own country, the UK.  After the first two years, we developed a relationship with Imperial College’s Imperial Business School and UK charities to open the programme in the UK (which has run for over eight years now).

2)      How big a problem is trafficking today?
Estimates are that 20-30 million people are enslaved in the world.  Some 600-800,000 people are trafficked across international borders each year, of which 80% are female and half are children (Source: US State Department).

3)      We tend to think of trafficking as the part of the sex industry – but I understand it’s much broader than that?
Trafficking includes other forms of forced labour, including domestic servitude, and forced marriage.  Human Trafficking of all kinds is $150 (£98) billion industry according to a new, rigorous ILO study.  Of that, $99 billion (£65 billion) are the annual profits in sex trafficking alone.  The annual profits per trafficked woman or child in the sex industry are $21,800 (£14,300).  Although only a small portion of trafficking comes from the sex trade, as we have seen from the recent refugee crisis, two thirds of the profits from trafficking are generated through sexual labour exploitation.

4)      What does HERA offer these women?
Intensive “boot camp”, three-week summer programme in entrepreneurship; trained business and other professional mentor for one year; and monthly business and career evening seminars at Imperial College’s Imperial Business School.  Also, we have two to three annual social events each year, including final mentor-mentee dinner, holiday party, and International Women’s Day panel in March.

To date HERA has also provided 138 grants to women’s ventures in five countries in Central and Eastern Europe to prevent dangerous migration and trafficking.

5)      Why is this important?
Following the training and mentoring, 85% of the UK women participants report positive career advancement including: finding work; piloting a venture; becoming self-employed; being accepted into higher education or other advanced training; and/or obtaining internships and apprenticeships.  Over 75% of the mentoring relationships complete a year’s cycle with 33% continuing on beyond the one year time frame.

6)      What difference has this made to the lives of the women you’ve worked with?
They recognise that they have critical resources, resilience, and skills gained from surviving their experiences and these enable them to succeed well in business and employment.  They obtain networks to help them launch their careers. Sarah from the UK had a lifetime of abuse and was sold by others into prostitution.  When exiting prostitution and drugs, she was referred by a local religious charity to HERA.  She has now started her own successful cooperative with other artists in the UK.

7)      How can other women in business help?
They can be mentors and/or can offer apprenticeships, internships, or entry level posts.   We are currently looking for a voluntary, certified financial reviewer for our accounts (may all be done online).  We also look for women entrepreneurs willing to share their experiences.

About Lynellyn Long:
Lynellyn Long PhD is Chair and co-founder of HERA, she is also a consultant on economic and social issues for international financial institutions and private companies.

About HERA:
HERA is a registered charity which promotes the economic autonomy of young women who have experienced violence and other forms of exploitation, so that they may become entrepreneurs and find formal employment.

HERA focuses on entrepreneurship to: prevent trafficking by creating alternatives to dangerous and irregular migration; build on the strengths of survivors to reintegrate into the formal economy; stop re-trafficking; create new livelihoods to address different kinds of vulnerabilities; and to become entrepreneurial about one’s career and life choices.