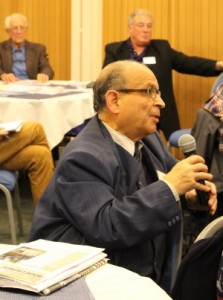 ‘Businesses need to re-define and focus on their purpose to be a force for good,’ stated Charles Wookey, CEO of Blueprint for Better Business, when he gave a keynote speech at Initiatives of Change’s London Centre on 6 October. He was speaking at a TIGETalk (Trust and Integrity in the Global Economy) hosted by IofC UK’s business programme.

Wookey emphasised that simply focusing on more laws and regulations will not solve the global crisis facing businesses today. Six years after the financial crisis, distrust in business is still evident, highlighted most recently by the VW emissions scandal.

Blueprint started life in 2012 through business leaders coming together with others concerned about the breakdown of trust between business and society. It now engages with a number of leading FTSE 100 companies. The need was for a societal perspective and the incorporation of human values. ‘Any economy needs to draw on human values, moral principles and thinking about the good for society which the market itself depends on but cannot generate,’ Wookey said.

At an early seminar before Blueprint started the chairman of a bank had said: ‘One of the problems in the go-go years is that people used to think there were only two questions: is it legal and is it profitable? If it was both, people could do anything they like.’ If these two questions are the only things to guide you then ethics, morals and societal good are not at the heart of decision-making. If businesses are designed to focus on profit and if that’s the only thing they care about then you end up with situations like the miss-selling of products, such as the PPI (Payment Protection Insurance) scandal.

‘The depth of the issues we are dealing with are not best thought of as a problem to solve but rather an opportunity to release latent potential,’ asserted Wookey. He said that many business people actually want to make a positive contribution to business and society but, because of the depth of cynicism, the public does not hear these positive stories. Wookey said the real situation is ‘the quality of innovation’ and the ‘joy of abundance’ in people feeling truly respected and making a positive contribution to society through their work.’

He set out two paradigms that Blueprint exists to challenge and help shift: one about business purpose and the other about people. When looking at purpose, many people, especially in finance, would say it is to maximise profits for shareholders. The economist Milton Friedman, who wrote an influential article in the New York Times, in the late 1970s had helped change the narrative to this dominant one we still see now. He had written: ‘The social responsibility of business is to increase its profits.’ However, this had not always been the dominant view of business purpose in the 1960s and 70s and there were many today who argued that for the good of business and society a re-examination of corporate purpose was urgently needed.

Wookey argued that an alternative paradigm was available which answered the question why the business exists in terms of the goods and services produced, and how the business served the common good of society and respected people. Profit was the condition and the outcome but not the purpose. Wookey quoted John Kay, the Financial Times journalist, who said: ‘Profit is to business as breathing is to life; without it you die but it is not why you get up in the morning.’

The second paradigm shift was about people. Wookey noted that much recent economic and business thinking assumed a narrow view of the individual person, motivated primarily by reward and status. Increasing evidence from empirical sciences in psychology, and well as the deep wisdom of faith and philosophy recognised that there was a more realistic view of people, which took into account that we are all fundamentally relational beings, for whom the quality of human relationships at home and at work matters. We are also hard-wired to be meaning-seeking, so that we want to make, and feel we are recognised for making, a positive contribution to society through work.

Wookey explained that those who had put the Blueprint principles and framework together had recognised that to address the question of business purpose in practice also demanded that effective ways be found to embed this thinking about people into a system of behaviours that would be a practical problem-solving tool for people in business, especially business leaders, and help release the potential of people to bring more of themselves to work.

The Blueprint’s five principles of a purpose driven business were a way of enabling business leader to think about the different constituencies and the different relationships the business has to have if it is to stay true to a pro-social purpose.’ The most essential part of this framework is for business to have a purpose, which delivers long-term sustainable performance. The other guiding principles are: to be honest and fair with customers and suppliers; be a responsible and responsive employer; ensure society is at the heart of decision-making and for businesses to be guardians of future generations.

The Blueprint’s underlying framework then focussed more on behaviours, and in doing so draws on Catholic social thought, virtues and ethics. The emphasis is on people and the quality of relationships in business, and how businesses might think about the development of character.’ What is important is including dignity and the value of people as well as the common good for society in a business purpose.

Speaking alongside Wookey, Laura Turkington told how she had recently joined Vodafone Group in London and is helping to develop a new global sustainable business strategy informed by the Blueprint. Vodafone’s involvement in the Blueprint started initially with a dialogue between their Vittorio Colao, Global CEO, Paul Polman, CEO, Unilever, Cardinal Vincent Nichols and several other industry leaders on trust and business following the economic crisis. Vodafone has been instrumental in the development of Blueprint and supports a purpose led approach in decision making and behaviours.

In developing their long term vision of becoming a sustainable business, Turkington embarked on a ‘gap assessment’ to evaluate how Vodafone measured up with the principles of the Blueprint for Better Business framework and to see where we could improve and also build upon existing programmes which were delivering social impact and made business sense. As Turkington said, ‘Doing good does not have to be at the expense of the shareholder.’