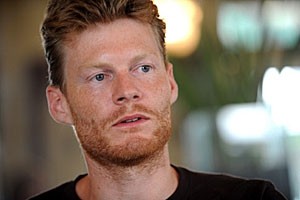 ‘Money is only the means, it is not the goal of business,’ commented Christian Felber, Austrian founder of the movement, Economy for the Common Good. He was speaking on the theme of ‘How to create an economy for the common good—Can caterpillars fly?’ in London on 2 November 2015. About 40 people took part in the forum, held at Initiatives of Change UK’s centre.

The event was hosted by Esther Ridsdale, co-founder and Director of the Civil Society Forum, and was held as a partnership between The Civil Society Forum, Economy for the Common Good and Initiatives of Change’s Trust & Integrity in the Global Economy (TIGE) programme. Felber was joined by Mark Drewell, founder and previous chair of the Globally Responsible Leadership Initiative, and the evening involved constructive dialogue between participants.

Felber’s visit to the UK aimed to engage British participants in the Economy for the Common Good (ECG) model, an economic system he has created based on ‘standards for human relationships as well as constitutional values’. Six ‘ECG business facilitators’ facilitated the roundtable discussions. The facilitators also support companies and organisations in creating a Common Report and a Common Good Balance Sheet by taking them through matrix indicators to help align the organisation to a sustainable society.

How can companies be ‘profitable’ in a way that helps humans thrive, conserves our planet for future generations and enables communities to maximize their contribution to the common good? Is there a way to put co-operation above greed? What sort of mind-set do we need to lead the change? These questions emphasise the growing search for what thought leader Charles Handy calls ‘Second Curve’: re-aligning our practices to build a world where all can flourish.

Felber teaches at the University of Vienna and is an international social commentator, lecturer and author. He prefers to be described as an activist rather than an economist, and outlined his vision for ways to change the system to unleash powerful changes for people and the planet. Making references to Aristotle and Adam Smith, Felber inspired the audience, who found his presentation and subsequent conversation compelling. Participants wanted to keep in touch in order to explore the issues further.

One concept that Felber presented from the ECG was the ‘Common Good Balance Sheet’. This, he said, pinpoints the most ethical companies and he hopes this will take precedence over traditional financial reporting. About 1,700 companies, primarily from Germany, Austria and Switzerland, have declared their support. More than 200 have produced one and had it assessed externally.

Mark Drewell said that many CEOs thought they scored eight, on a scale of one to 10, when it came to environmental sustainability. In practice they often only score two to three, he said, quoting the UN’s Global Compact-Accenture CEO study on Sustainability in 2013.

‘At its core, ECG wants to apply the standards of human relationships to the world of business,’ Felber concluded.