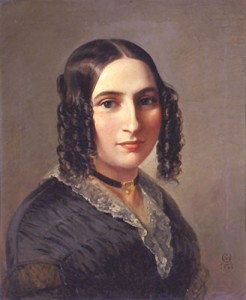 You have probably not heard of Fanny Hensel. If we call her by her maiden name, Mendelssohn, then maybe there is a clue to her talents. If we consider the words of her father “the only calling which befits a woman is that of a housewife”, then we may get a clue to why she is not better known.

Fanny Mendelssohn was born in Hamburg to a prosperous family. She was the daughter of a Berlin banker and granddaughter of the renowned philosopher, Moses Mendelssohn. She was the oldest of four children, including Felix, who retains fame as a composer. Both children received a thorough musical education and they were considered to be equally gifted. At the age of 13 Fanny scored a Handel oratorio for full orchestra and memorized 24 Bach preludes which she performed as a birthday present for her father. Three years later, she composed this Sonata Movement in E Major, a highly sophisticated piece.

Fanny studied with the pianist Marie Bigot in Paris and then with Ludwig Berger. In 1820 Fanny and Felix joined the Sing-Akademie zu Berlin which was led by Carl Friedrich Zelter. In talking of Fanny to his friend Goethe he wrote, “This child is really something special”. However Fanny was limited in her ambition to become a professional musician by the prevailing attitudes of the time. Her own father wrote that while music might be the profession for Felix it “can and must be only an ornament” for her. Felix was privately broadly supportive of her as a composer and a performer but cautioned against her publishing works under her own name, though he did publish some of her songs under his name, in his Op. 8 and 9 collections. This led to a moment of embarrassment for Felix hen he met Queen Victoria. She told him that his work ‘Italien’ was her favourite and he had to confess that this was a piece composed by Fanny.

Fanny composed over 400 works: songs, duets and quartets for voices and piano, cantatas and an oratorio, works for organ, string quartets, a trio for piano, violin and cello and works for solo piano. Her piano works are often in the manner of songs, a style successfully developed later by Felix.

Fanny married the Prussian Court Painter, Wilhelm Hensel. While public performances of her work was limited, she settled into Berlin social life by holding salon concerts in her home. These became well known and well attended, including Franz Liszt, Clara Wieck-Schumann, Heinrich Heine and other notable musical figures of the day.

In 1839/40 Fanny and Wilhelm spent a year travelling in Italy, where she finally received recognition for her work beyond the family circle. She became acquainted with many musicians who thought highly of her work and were supportive of her creativity. When she returned to Berlin she composed her most important piano work, the biographical cycle DAS JAHR (The Year). At that time, Fanny was the only composer to use the idea of depicting each of the twelve months of the year musically.

Fanny continued to compose throughout her life, and, with encouragement from her husband, went on to publish several books of songs and piano pieces in her own name.

In 1847, while rehearsing for one of her salons, Fanny collapsed and died of a stroke. She was just 42. On hearing of her death, the Berlin music critic Ludwig Rellstab wrote that she had shared “a partnership of talent” with her famous brother and “had achieved a level of musical knowledge which few other artists who have dedicated their lives to music could claim”. Today Fanny Hensel Mendelssohn is considered to be one of the most important composers of the romantic era.