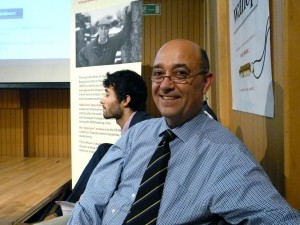 Halifax Bank of Scotland whistleblower Paul Moore launched his new book Crash Bank Wallop in front of a packed audience at the London centre of Initiatives of Change on 6 November. The book tells the shocking story of what happened behind the scenes at one of the UK’s biggest banks in the run-up to the 2008 financial crisis.

The 57-year-old Moore, father of three, had been fired from his job as Head of Group Regulatory Risk at HBOS in 2004 after warning management about their dangerous sales tactics. He and supporters gave an inspiring two-hour presentation to a private gathering of family, friends and colleagues in the IofC centre.

Mike Smith, Head of Business Programmes for Initiatives of Change UK, introduced Moore whom he had first met four years ago. ‘Paul’s book is the story of a true hero,’ Smith said. ‘He is valiant for truth. The book is sensational, a revelation, an eye-opener. Paul brings to it a barrister’s forensic analysis and attention to detail. Yet it’s a very pacey read. I hope you’ll buy it in bucket loads.’ Smith referred to the Roman Catholic faith of Moore and his wife, Maureen, which had sustained them.

Moore spoke about the terrible suffering he and his family had gone through since his sacking in 2004 and his subsequent blowing of the whistle to the UK Treasury Select Committee. This sent shockwaves to the heart of the British Establishment and caused a media frenzy. He showed a clip from the BBC TV Newsnight programme presented by Jeremy Paxman which broke the story, along with part of a BBC Radio 4 interview he had with presenter Michael Buerk.

Co-author and journalist Mike Haworth spoke about how the book came to be written. He read a selection of reviews from influential figures including Paul Mason, the Economics Editor of Channel 4 News, and Michael Woodford, former CEO and whistleblower of Olympus Corporation, who was present at the book launch.

Moore was joined on the stage by his children, Emily, Daniel and Oliver, who all read poignant extracts from the book and spoke about their traumatic family experiences. Their father had suffered addiction, deep depression and suicidal tendencies as a direct result of what happened to him at HBOS but Moore explained how, with the support of his wife Maureen, he was looking to the future with hope and optimism.

He revealed details of his on-going battle for truth and justice through The New Wilberforce Movement, a grass-roots initiative to restore trust, ethics and integrity in society.

After the presentation Mr Moore and Mr Haworth signed copies of the book, which can be purchased in hardback and paperback by visiting www.crashbankwallop.co.uk

A story in the Daily Express relating to the launch can be read at http://www.express.co.uk/news/uk/617516/Banking-crash-economy

John Ellis, a former economist at the Bank of England and now the lay moderator of the General Assembly of the United Reformed Church in the UK, wrote a blog of his reflections on the URC’s website, following the book’s launch.