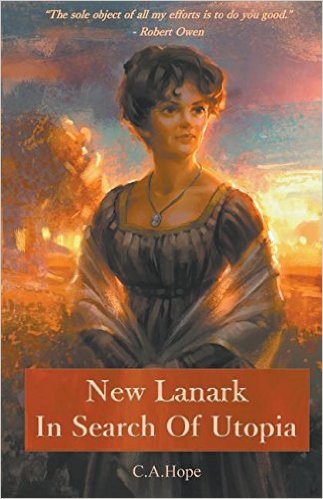 New Lanark – In Search of Utopia by C A Hope

This is the final book in the trilogy by C A Hope which is based on the true story of the birth of the New Lanark cotton mills which is now a UNESCO Heritage Site.

Previously I reviewed the first two books: New Lanark Spinning New Lives and New Lanark: Living with a Visionary, in this magazine.

I enjoyed the first book which mixed fiction with fact. The facts of the life of David Dale, whose benevolent management of the mills at New Lanark was revolutionary, were contrasted with the lives of his workers, specifically with the Scott family. C A Hope managed to make the true lives of the Dale family just as interesting as the fictionalised, albeit very much based on fact, lives of the Scott family. I found myself just as interested in finding out about how their lives played out, as knowing the facts of the lives of the Dale family and, in particular, the life of Anne Caroline Dale who was to become the wife of the legendary Robert Owen, the visionary of the title.

In the second book Robert Owen takes over the running of the mills from David Dale. Unlike Dale, who was universally loved, Owen is is for a long time resented and misunderstood. This is a further difficulty for his loving wife but while she can understand the ‘visionary’ in Owen it is little understood not only by his employees but also by his partners in the mill. Over time they become more concerned about profit in a difficult financial climate, due to the Napoleonic wars, and less and less interested in improving the conditions of the workers.

In this last book, we find that Owen has at last been given the credit by his workers for his approach. They now understand better the vision he has for New Lanark mills and for the improvement in the lives of the people who live and work there. This book continues to follow Owen as he works hard to share and roll out his vision which involves him being away from home often. He remains optimistic in the face of downright hostility on the part of many of the politicians of the day and his fellow mill owners. Many of these use the fact that he is not religious against him, although in the end that is not what finally defeats his attempts to change the terrible practices in the factories of the time. He cannot make the economic case compelling enough.

However he does make many friends in high places who help him to spread the word but even these contacts are insufficient to help him realise his dream for a better life for the poor of the country. The contact with well known figures of the day included, amongst others, Jeremy Bentham and the Duke of Kent and are expertly woven into the story with the many fictional characters in the book.

The reality of the times in which the author is writing provides a backdrop to the daily lives of the Owen family especially Anne Caroline, Owen’s wife but also including his children and her sisters. Set along side this is the fictionalised lives of the Scott family and many others who live and work in New Lanark. The characters are well-formed and from an historical point of view the book paints a very realistic picture of what it was like to live in those times. As in the previous book, the contrast between the lives of the Owen family and the Scott family is only too obvious in the many enlightening details of what it was like to be poor. One of the many details that stays in my mind was of the general rejoicing when Owen reduced the working day to ten and three quarter hours.

The author tells the story of a particular time in history which covers the French revolution, Napoleonic wars, the aftermath of the American war of independence and the economic problems resulting from these. However she does it in such a way that the social and economic history of the time comes alive and we understand better how lives were lived and lost.

The New Lanark mills become economically viable and Owen is able to introduce many of the improvements that he has wished for, for a long time, not only in the mills but in the schooling of children. His own children become involved in the school, teaching and his older sons in the business of the mill. The Scott family prospers but has its share of tragedy and joy.

Increasingly Owen is desperate to demonstrate his vision of how communities can work together in harmony, how his ‘method’ can improve lives and at the same time be economically viable. His increasing wealth allows him to consider different options and at the end of the book he decides to leave New Lanark in order to live out his vision in America.

I enjoyed all three of these books. I learned a lot about a time in our history which had previously been largely unknown to me, although I did know of New Lanark as I had visited the site. I cared about what happened to the Owen and Scott families because the author brought them alive through her storytelling. Each time I looked forward to the next book and this time was so curious about Robert Owen and his family that I needed to find out what happened to him in America where he set up the community of New Harmony. I knew that production had continued at New Lanark until the late 1960s but what struck me was that nothing had changed from Owen’s day in at least one way. Many people visited from near and far to look at what Owen achieved during his life-time. People are still coming from near and far to appreciate what he achieved two hundred years ago. A visionary indeed.