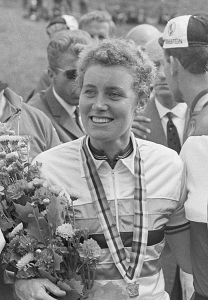 Beryl Burton was an English cyclist who won more than 90 domestic championships and seven world titles. On 17 September 1967, at the UK National Time Trial, Beryl rode a staggering 277.25 miles in 12 hours around the lanes of Yorkshire. This was a world record for both men and women! It was two years before a man bettered her record. Her women’s world record still stands some 50 years later. She did this while working full-time on a rhubarb farm!

When I was growing up in the North West of England Beryl Burton’s was a familiar name, she was runner up to Henry Cooper in the 1967 BBC Sports Personality of the Year Award, but like many amazing women, her story has faded despite the rise in popularity of the sport of cycling.

Beryl was born in Leeds and lived in nearby Morley throughout her life. In childhood, she suffered chronic health problems and spent 15 months in hospital and a convalescent home due to rheumatic fever. It was her husband Charlie who introduced her to cycling. Throughout her career Charlie was a massive support, as her race mechanic, chauffeur and childminder to their daughter Denise. Two years after their marriage she took her first national medal and was soon competing internationally. In 1960 she won the women’s world road race championship, a title she won again in 1967. She was equally at home on the track, specialising in the individual pursuit. She was world champion five times (1959, 1960, 1962, 1963 and 1966), silver-medallist three times (1961, 1964 and 1968), and winner of bronze in 1967, 1970, 1971 and 1973.

Her beating of the world time-trail record is a truly phenomenal achievement. In the race the women set off two minutes behind the men but Beryl eventually caught up with the men, including the men’s champion, Mike McNamara. As she was passing him she famously offered Mike a Liquorice Allsort, which he accepted, before peddling off to set a world record for women and men! It is remarkable that, even in times of scientific training methods, fitness coaches and drug enhanced performances, that no woman has yet bettered her time. Beryl’s physical strength came from the hard manual labour of working on a rhubarb farm and she spent hours cycling up and down the Yorkshire Dales, often covering up to 600 miles a week.

Sadly Beryl didn’t get the chance to win an Olympic medal, as women’s cycling was only admitted into the Olympic Games in 1984, by which time Burton was 47.

Beryl Burton died on the eve of her 59th birthday, while out on her bike, posting invitations for her birthday party. Beryl had always had heart arrhythmia and she died of heart failure during the ride and was found, fittingly perhaps, on the road alongside her bike.

In 2012 a radio play, written by actress Maxine Peake, Beryl: A Love Story On Two Wheels, was broadcast by BBC Radio 4. The radio play was rewritten and performed as a stage play in 2014 to celebrate the Tour De France starting in Yorkshire.