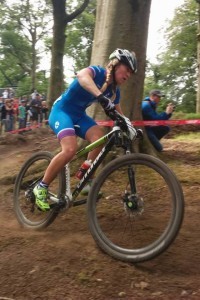 Lee is a mountain biker. She represented Scotland at the 2014 Commonwealth Games, was the British National Mountain Bike Champion in 2013 and a member of Team GB in 2011 and 2012. Lee established and coordinates Cycletherapy, a project that works with young people who are struggling to stay in school due to social, emotional or behavioural issues. She has a degree in Outdoor Education and a postgraduate training in Child and Adolescent Psychotherapy.

I didn’t get into the world of racing by the standard route. The majority of women I would stand shoulder to shoulder with on World Cup start lines had been nurtured and coaxed to the level they were at from a very early age. I was always an active kid and would disappearing for hours on end on my wee red BMX, but I didn’t race. At the time my contemporaries were beginning to plug themselves into watt bikes and performing vo2max tests, I was carrying my mountain bike up hills with no idea whether I’d be able to ride off the other side or not. Although I became much more scientific about my training in later years, I have always tried to maintain the foundation on which my involvement in cycling is built. Adventure, exploration and, most importantly, enjoying the feeling of my body moving well. But maintaining this balance has been difficult in the world of elite sport.

In the summer of 2013 the pressure started to build. Selections were underway for the Commonwealth Games and individual performances were being considered against others. I was the reigning British Champion and a marked woman. I began to lose my love for bike riding and started to feel selfish, stressed and defensive. I’ve always been struck by how competition reveals both the very worst and the very best of humanity. While racing against others, a primal instinct takes over which is as ugly as it is impressive and I’ve always felt proud and embarrassed in equal measure to be good at it.

As women, we can get a hard time for displaying our aggression in a sporting context yet there is a nobility in the woman who would fight to the death to protect her children and perhaps rightly so. Perhaps protecting something more vulnerable than yourself is a worthier way to spend that kind of energy than beating others in a race but it comes from the same, deep down place.

I don’t have children of my own that I have to stay in sparring practise in order to defend, but I still love that feeling of being sharp and quick and in control. I have found the solution is to keep it in context which, for me, means not losing touch with the underlying reasons for competing in the first place.

This is why in August 2013, after a World Cup in The Pyrenees, I didn’t get on the flight with the rest of the Scottish squad and instead I rode my bike home.

I knew I was in very real danger of succumbing to the pressure of the Commonwealth selection situation and throwing in the towel altogether. I had to get back in touch with the part of me that enjoyed riding my bike because of the way it made me feel rather than the result I might achieve compared to other people.

The steady rhythm I fell into when making this journey reset my mind. My senses became sharp once again when given the time to appreciate the smells, sights and sounds around me and I felt a contentment I had all but forgotten. There was something so satisfying in abandoning the mindset I’d got into of overanalysing every little detail that might improve my performance. Days before I had found myself worrying over tyre choice as though my life depended on it and I realised I had begun to complete 5 hour training rides without acknowledging anything other than the data my tiny handlebar mounted Garmin offered. But little by little thinking gave way to feeling on this trip and I got back to the UK with my feet back on the ground. Interestingly, although I’d missed a lot of the training prescribed to me for that period, I went straight into a National Points Series race, felt amazing and won easily.

Since then the Commonwealth Games has come and gone. I perhaps didn’t stay completely zen up to and including my race in front of that fabulous home crowd, but I know my performance in Glasgow was better as a direct result of staying in touch with the reasons I began riding in the first place. Being in touch with these reasons helps me encourage others into the sport too. The young people I work with (usually 14/15 year old boys struggling with the school system and displaying anti-social behaviour) right through to the 50 year old women I coach through a local mountain bike club can all relate to the freedom and fun it’s possible to achieve by riding a bike. I find I have more in common with these two diverse groups of people while we whoop and holler our way through the forest than I ever did with many of the elite level racers on the World Cup circuit. Heightened feelings of self-worth and confidence naturally follow such an experience in a similar way to winning or performing well in a race might and I really enjoy watching people discover this.

I think I’ll always want to race my bike though. That ugly, noble aggression coupled with control and focus is a pretty addictive state to find yourself in, but now I’ll only race if I’m sure I have hold of the bigger picture. Balancing my time between riding with others and for myself helps with this.

I have since returned to the adventurous foundations I first nurtured on my red BMX. I’m still pushing the boundaries of what I thought I was capable of on a bike but more in terms of big, challenging multi day routes where I need to be completely self-reliant. I can bring more people alongside this way too. Adventure and fun transcends barriers more easily than competition ever will but the primal instincts remain the same.

For more articles like this one, visit Scottish Women In Sport