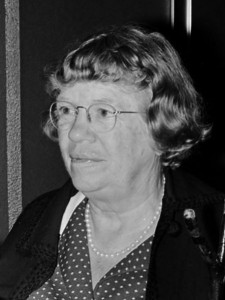 “Never doubt that a small group of thoughtful, committed citizens can change the world; indeed, it’s the only thing that ever has.”

I’m sure that you will have seen that quotation all over the internet. You may even have it in your room on one of those motivational posters. It is possible you know that it was first coined by Margaret Mead. My personal favourite quotation of Margaret’s is, “Always remember that you are absolutely unique. Just like everyone else.” However I’m pretty sure that most wont know that Margaret was famous beyond creating repeatable truths and that when she died she was the most famous anthropologist in the world.

Margaret was born in Philadelphia in 1901, the eldest of five children. Her father was professor of economics at the University of Pennsylvania and her mother was a sociologist who studied Italian immigrants. Her family moved frequently, so part of her early education was through home-schooling. After school, she studied psychology and went on to earn a doctorate at Columbia. For her, anthropology was a way to bring new understandings of human behaviour to bear on the future of humanity.

She did her first field work in Samoa, focusing on adolescent girls. These investigations were published in her book Coming of Age in Samoa, which became a best seller. The work was ground-breaking as it explored, for the first time, the idea that the childhood and adolescent experience of growing up could be shaped by cultural demands and expectations, resulting in the fact that sexual development could be more or less problematic in different cultures.

In 1929 she went to New Guinea, where she studied the play behaviour of younger children and the ways in which that behaviour was shaped by the adult society in which they lived. This work, published as Growing Up in New Guinea, effectively refuted the notion that “primitive” peoples are “like children. Margaret was, therefore, the first anthropologist to look at human development in a cross-cultural perspective and showed beyond question that different stages in a persons development, and the relationships between them, need to be studied in every culture. In later work, also in New Guinea, she demonstrated that gender roles differed from one society to another, and that this was due as much to cultural influences as biological differences between the sexes.

Margaret was married three times, the third and longest-lasting marriage was to the British Anthropologist Gregory Bateson, with whom she had a daughter, Mary, who would also become an anthropologist. At that time her pediatrician was Benjamin Spock, whose writings on child rearing incorporated some of Margaret’s own practices and beliefs, in particular that breastfeeding should be as the baby required rather than to a rigid feeding schedule.

Margaret held many senior positions in academia and in public life including, curator of ethnology at the American Museum of Natural History, Fellow of the American Academy of Arts and Sciences, Professor of anthropology and chair of the Division of Social Sciences at Fordham University’s Distinguished Professor of Sociology and Anthropology at Rhode Island University. She served as president of the American Anthropological Association and held various positions in the American Association for the Advancement of Science, notably president in 1975 and chair of the executive committee of the board of directors in 1976.
Margaret is credited with the pluralization of the term “semiotics and in later life she was a mentor to many young anthropologists and sociologists. In 1976 she was a key participant at UN Habitat I, the first UN forum on human settlements. Margaret Mead died of pancreatic cancer in 1978.

She was committed to the possibility that we in the technologically more advanced civilisations could learn from other groups and asserted that human diversity is a resource, not a handicap and that all human beings have the capacity to learn from and teach each other. Her interests, and writings, cover areas such as race conflict, childcare, women’s rights, marital relations, mental health, education, drug abuse, American foreign policy, the environment and nuclear disarmament and frequently brought her into conflict with those that didn’t share her views. However it is clear that her main driver was to strive to build a better world for all.

It is this insight and her own delight in learning from others that made her such an effective and influential public speaker and creator of so many insights and repeatable quotations.