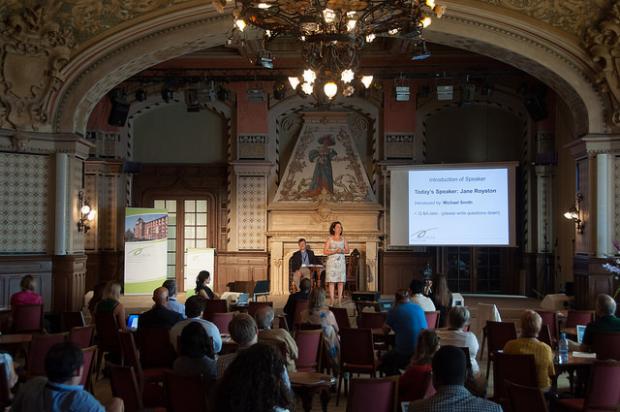 Jane Royston, the Anglo-Swiss business woman renowned for founding NatSoft, which became the largest IT company in French-speaking Switzerland, shared her personal story of leadership and transformation when she addressed the second day of the Trust and Integrity in the Global Economy conference in the Caux Conference Centre in Switzerland, on 27 June.

‘If it’s summed up in a couple words, it’s trust and integrity,’ Royston said about ethical business.

As someone who has always followed her passions, Royston began her business experience in the hopes that a larger organisation would allow for travel. Aged 21, she joined the Information Technology Department, consisting of 70 men, at DuPont, the American chemicals giant.

Near the beginning of her career there, her boss presented her with a challenge. A new word processing system needed to be introduced for all the secretaries and she was considered the ideal person to do so. ‘This was the first time in my life I had actually encountered any kind of discrimination. It was blatantly sexism, just assuming that I, as the only woman in the department, would be the ideal person to teach secretaries how to use word processing. So I thought, I’ll show them what women can do. It was one of those pivotal moments,’ Royston reflected.

Following this assignment, which she refused, Royston began to work hard and received recognition, soon making the Fast Track programme for future leaders of the company. The company offered her a job to run a large new data centre in Paris where, at just 25, she was in charge of 27 people, mostly men her father’s age.

Her new post appeared successful. The Director of DuPont France announced record results and congratulated the employees. But, in order to continue with the advancing results, he shared his plan to fire 10 per cent of the workforce. Royston was shocked by the continued celebration among employees and could not agree with the business decision. She felt it was not the correct way to run the company.

‘I went home that night and I had a dream about running a company where all the employees would share in all the decisions, the employees would share in all of the profit and it just basically is run by all the people in the company. And I woke up in the morning and I thought, that’s what I’m going to do. And I gave notice the next day,’ she explained.

Arriving back in Switzerland with only a dream and no plan, Royston registered the company name of NatSoft. She began creating and spreading brochures, but to no avail. For six months, she continued a cycle of phone calls and visits with polite people who agreed to meet her. But none of this led to contracts. Finally, she received a small contract which then led to a big break with the Swiss Social Security System a month later.

By the end of the first year, following her contract with the Social Security System, NatSoft had 10 employees, which soon became 18. A few years later, Royston was elected Swiss Business Woman of the Year, an award which she received with complete surprise.

‘That was a turning point because suddenly from it being a massive disadvantage being young and female, it suddenly became a big advantage because the difference was a positive thing instead of a negative thing,’ Royston said.

Royston’s business continued to grow and soon, with a staff of about 120 people, it was twice as big as the nearest competitor. With this success, the next step was to become international. But, with two young children at home, she decided to sell the business to an American company instead of taking that step herself.

Royston, who built her company with only her DuPont training behind her, attributes her success to three differentiating areas: working with clients as true partners, the leadership style and the employees.

‘We never overcharged. If we couldn’t do something we said we couldn’t. If we said we could do something, we did it. We delivered every single project, with one exception, on time and within budget, whatever it cost us. If we had to double the size of the team, if we had to work the weekends, we would do it. But we did it on time and on budget every single time, which meant the clients came back,’ Royston said.

In regards to technology, Royston made sure her employees were a step ahead of their clients by staying at the leading edge of technology. This meant that clients would learn from NatSoft where to invest in and where things were heading, which they could then present to their boss, appearing savvy and intelligent.

‘But I think it really is the partnership, it’s giving your word. We worked often without contract… We gave an offer, we shook hands and the project started,’ Royston said, tying the first two attributes of success together.

NatSoft also aimed to hire the people who were the best fit for the company. Of 120 employees, three were designated solely to recruitment so as not to compromise on quality. With the help of frequent training, two evenings a week, all workers were able to keep skills up to date, helping the company retain the best people. Additionally, Royston distributed 50 per cent of the profits in bonuses and decisions were made as a team, not leaving the room until the majority were in favour of a decision, allowing for every employee to understand the reasons behind each decision.

Royston pointed out that several of her most dedicated employees came out of long-term unemployment and she made it a preference to hire those from similar situations.

Royston expressed the importance of a long-term over a short-term vision. The American company that bought NatSoft ended up going bankrupt with their focus on short-term results. This may or may not have been related, but for any company that wants to be successful, Royston said, the focus should be on the long-term future.

Initiatives of Change (IofC) is a world-wide movement of people of diverse cultures and backgrounds, who are committed to the transformation of society through changes in human motives and behaviour, starting with their own. IofC works to inspire, equip and connect people to address world needs, starting with themselves, in the areas of trustbuilding, ethical leadership and sustainable living.

IofC’s business programme TIGE (Trust & Integrity in the Global Economy) works to strengthen the motivations of care and moral commitment in economic life and thinking.