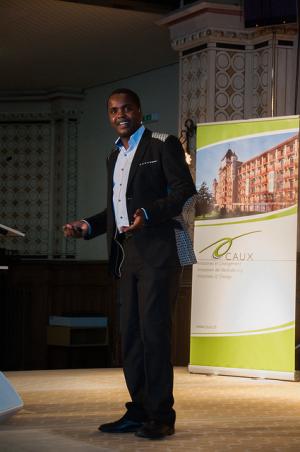 Kenyan entrepreneur Emmanuel Mutisya spoke about the challenges of standing against corruption when he told his story of individual and business transformation on 28 June. He was speaking on the third day of the annual conference on Trust and Integrity in the Global Economy inthe Caux Conference Centre, Switzerland.

Mutisya, who gained his Masters degree in Sweden, told how at a young age he founding a ‘micro-small enterprise’ (MSE) selling tea and chapattis, in Nairobi. He and his father later moved into the restaurant and tourism sector, selling art and crafts and providing sightseeing tours.

‘In Kenya, I was blind to the fallacies of the business sector in terms of corruption and bribery,’ he said. ‘Going out of Kenya made me see my country from a new perspective’, referring to his years as a student and employee in Sweden and then in Japan.

‘People used to think that the motivations of doing business is to have more money, more power, influence and then this ultimately leads to happiness. This was not true for us. That happiness never reached our door.’

A key challenge he encountered, in all the businesses he pursued in Kenya, was the systematic occurrence of corruption and bribery. The behavior was considered a normal way of life, deeply embedded into the business culture.

‘My Dad used to say to me when I voiced my frustration, “Son, this is the system and you can’t change the system, you have to play by its rules.’’ But even if we played by its rules business was still going badly,’ Mutisya said. He admitted to having engaged in bribery himself.

It was only after moving to Sweden to pursue his Master’s studies that he gained a new perspective onto what could drive the effectiveness and sustainability of his business: authenticity. An elderly members of Initiatives of Change in Sweden encouraged him that one could pursue successful business while incorporating the four standards of purity, love, unselfishness and honesty into ones business practices. ‘I was aware of that those principles are stressed in the Bible, but the insight that they could be incorporated into business changed my life,’ Mutisya declared.

However, applying those standards to his business was a tough transition. ‘Upon my return to Kenya, my Dad thought I had gone crazy! Corruption was a part of life and my Dad was a part of that system,’ he said.

His father did not believe his visions of running business as unusual, but Emmanuel was committed to fulfilling his goal and taking on the responsibility of challenging the system. Financial struggles and personal doubts recurred in the first year of his business transition. The police, for instance, would stop their tourists buses and find invalid faults with their licenses or tyres, in order to demand bribes. This delayed journeys and cut into the company’s profits. Mutisya felt like giving up. But to his surprise, after a year, his father changed his tune and supported his stance against corruption. The police, for their part, realized there was nothing to be gained from a business that refused to pay bribes and stopped harassing them. ‘The police marked our vehicles. They said, “Let those fools pass. They are wasting our time.” In the next six to eight months the business picked up,’ Mutisya said.

With the support of his family, Mutisya managed to build the sustainable business model he had dreamed of: one which is anchored in the principles of ‘trust and honesty’ in dealing with shareholders, ‘collectivity’ including investment for collective gains, ‘discipline’, in that it sets ethical norms and business rules, and ‘etiquette’ by treating all stakeholders fairly. Mutisya said it is a business model which encourages other Kenyans to take their own personal responsibility in refusing to submit to the corrupt norms in society.

Now Mutisya runs the Kenya-Japan Association, with a staff of 58 people, engaged in connecting investors and businesses between Kenya and Japan.

Initiatives of Change (IofC) is a world-wide movement of people of diverse cultures and backgrounds, who are committed to the transformation of society through changes in human motives and behaviour, starting with their own. IofC works to inspire, equip and connect people to address world needs, starting with themselves, in the areas of trustbuilding, ethical leadership and sustainable living.

IofC’s business programme TIGE (Trust & Integrity in the Global Economy) works to strengthen the motivations of care and moral commitment in economic life and thinking.