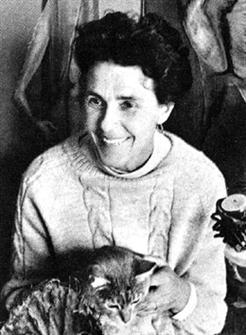 Leonora Carrington was a British-born artist, surrealist painter and novelist. Leonora lived and worked in Mexico and was a founding member of the Women’s Liberation Movement in Mexico during the 1970s.

Leonora was born in Lancashire. Her father was a wealthy textile manufacturer,  a principal shareholder in Imperial Chemicals (ICI), who was able to to afford a decent education, although, thanks to her rebellious behaviour, she was expelled from two schools. Having failed to interest her in formal education, her family sent her to Florence to study art. While her father wasn’t keen for Leonara to pursue a career as an artist, her mother encouraged it. Leonora returned to England and was presented at Court where she was presented to George V at Buckingham Palace, but she was a very reluctant debutant. In 1935, she attended the Chelsea School of Art in London for a year before transferring to Ozenfant Academy.

While at art school in London, Leonora saw the work of the German surrealist Max Ernst. The pair were immediately attracted when they met at a London party and they returned together to Paris. Ernst, 26 years Leonora’s senior, separated from his wife and the pair settled in southern France. In 1939, Leonora painted a portrait of Max as a tribute to their relationship. With the outbreak of World War II, soon after the Nazis invaded France, Ernst was arrested. He managed to escape and, leaving Carrington behind, fled to America. Leonora was devastated and fled to Spain, where her mental health deteriorated such that her parents had to intervene and have her hospitalised. She was evetually released into the care of a nurse who took her to Lisbon, but she ran away and sought refuge in the Mexican Embassy. From here the Mexican Ambassador arranged passage for her to Mexico, marrying her in the process.

Along with with fellow refugee surrealists, including Benjamin Peret, Rmedios Varo and Kati Horna, Leonora established herself in Mexico City. She settled with her second husband Chiki Weisz, whom she married in 1943.

Her surrealist paintings are fabulous creations, strange yet familiar, which mingle dreamscapes, fantastical creatures and scenes reminiscent of Bosch. Her work often reflects mysticism and magic. Her paintings are a menagerie of familiar animals but also griffins and imaginary creatures that exist in the space between human and animal.

In the early days her paintings were sold for as little as a few hundred dollars, many to Edward James, who was a loyal patron.  In 2014 her painting The Giantess went for more than $1.5 million at Christie’s!

Leonora was more than a major painter. She worked in many arenas; designs and costumes for plays, textiles, sculptures, mural, etchings, lithographs, illustrated poems and designs for remarkable hats. Her novella, The Hearing Trumpet is a comedic classic, set in a home for disgraceful old ladies it has distinct feminist undertones.