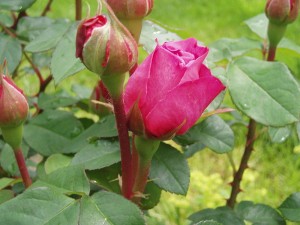 Gertrude Jekyll was born in Mayfair, the fifth of seven children. Her father was a Captain in the Grenadier Guards. Her younger brother was a friend of Robert Louis Stevenson, who borrowed the family name for his book Dr Jekyll and Mr Hyde. Her on circle of friends was wide and influential and included John Ruskin and William Morris.

Gertrude is best known for her garden design and created over 400 gardens in the UK, Europe and America. In addition, Gertrude and Sir Edwin Lutyens formed one of the most influential partnerships of the Arts and Crafts movement. Her passion for gardening was started in 1861 at South Kensington School of Art, where she studied the writings of her friend Ruskin and the paintings of JMW Turner. She travelled widely and recorded her observations in watercolours and oil. When her father died Gertrude and her mother moved to a newly built house in Munstead, Surrey and it was here that she began creating gardens.

With regard to garden design, Gertrude took a very painterly approach, particularly when selecting the radiant colours and flowing design of her flower borders, and was influenced by the work of both Turner and the French Impressionists. It is also possible that the deterioration in her eyesight that forced her to stop painting was also important in some of her more impressionistic garden designs. Gertrude wrote many books on gardening, often illustrated by her own photographs and drawings, including her most famous book, Colour in the Flower Garden. Her books were concerned with garden ornaments and flower decoration in the home as well as the principles of planting, colour grouping and garden design.

Her creativity went beyond garden design and she mastered many crafts including, thatching, fencing, walling, carpentry, metalwork, carving, gilding and inlaying, as well as working in silver decorated by embossing. She took up photography, which allowed her to continue to capture images when her eyesight failed.

Her interest in country crafts led to her collecting old household implements and recording their use. Her book Old West Surrey includes her photographs of illustrations and the old crafts and cottages she had seen in her travels around Surrey.

Gertrude was also a supporter of the campaign for female suffrage. She created an embroidered banner for the Godalming Branch of the National Union of Women’s Suffrage Societies which was paraded on a Suffrage Pilgrimage through Guildford in July 1913.