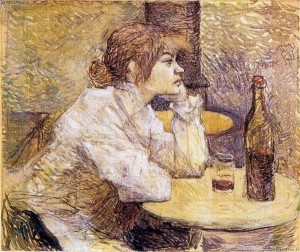 Because a lot of women were married to or friends with male artists, history has assumed that they were a muse to the great man or, if they produced works of their own, that they were helped by their husbands. So, when you look at the WikiCommons library for Suzanne Valadon, you see portraits of her by, amongst others, Toulouse-Lautrec and Renoir. Even the bigraphy by June Rose fails to mention her artstic talent first and foremost, instead going by the title “Mistress of Monmatre”.

But Suzanne Valadon was an artist in her own right and the first woman painter admitted to the Société Nationale des Beaux-Arts.

Suzanne, born Marie-Clementine, was not born into an artistic family, she was the daughter of an unmarried laundress. She had little education and was set to work from the age of just 11, in a variety of jobs from working in a factory making funeral wreaths, selling vegetables and waitressing before training as a circus acrobat. She had not formal training as an artist, instead she observed the techniques of artists for who she modelled and by reading Toulouse-Lautrec’s books. She worked for 10 years under the name Maria and got her name Suzanne from Toulose-Lautrec.

When just 18 years old she gave birth to her son, Maurice. Suzanne’s mother cared for Maurice so that Suzanne could return to her work as a model. Miguel Utrillo would later sign papers recognizing Maurice as his son, although his true paternity is uncertain. Maurice Utrillo went on to be an artist too.

Her lifestyle as a model was bohemian, to say the least and she had affairs with many men, including Pierre-Auguste Renoir, Erik Satie and Henri Toulouse-Lautrec.

Suzanne became a full-time painter after her marriage to Paul Mousis. To begin with she produced mostly drawings and began painting later. Her first models were her family and her first female nude, a subject that she would become associated with, was made in 1892. Many of her works relate to sexual pleasure and her works for the Salon were some of the first examples where the man was painted as the object of desire by a woman. Her candid and provocative nudes, like her sexual conduct, defied convention. Her paintings feature rich colors and bold brushwork with firm black to emphasize the structure of the naked body. Her paintings are brutally honest, they force us to react to their boldness and, since Suzaane was self-taught, cannot be easily categorised as she had a style all her own.

Aged 50 she fell in love and married Andre Utter, also an artist and a man twenty-one years her junior and returned to a bohemian life.

Suzanne Valadon Valadon transformed the representation of the female naked body by giving full expression of women’s experiences.
She died of a stroke at the age of 72 and is buried in the Cimetière de Saint-Ouen in Paris.