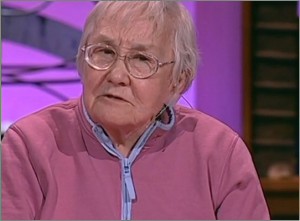 I remember hearing about something called the Aquatic Ape Theory, a hypothesis that suggests that our ancestors went through an aquatic phase proposed initially by Alister Hardy and enthusiastically supported by Elaine Morgan. Since we are very close to St. Davids Day this seems like a great time to celebrate this incredible Welsh Woman.

Elaine was born near Pontypridd, in Wales. Her mother was the daughter of West Country immigrants who, due to the extreme poverty of the family with three generations of the family living together in one small cottage , had run the family home alone since the age of ten. Her mother was determined that Elaine would not suffer the same fate and encouraged her study, which she did gaining entrance to Lady Margaret Hall, Oxford.

Here she began to take an interest in socialism, and joined the university’s Democratic Socialist Club, of which she later became Chairman and also joined the Fabian Society,

She graduated from Lady Margaret Hall with a degree in English and began writing in the 1950s. She wrote for many television series including the adaptations of How Green Was My Valley (1975) and Testament of Youth (1979), the latter earning her Writer of the Year Award from the Royal Television Society.

She wrote a weekly column for the Welsh newspaper The Western Mail, and was awarded Columnist of the Year for 2011 in the Society of Editors’ Regional Press Awards.

Aside from her writing, Elaine spent her life on a mission to prove that humans evolved in water. Essentially, the theory seeks to answer the question of why humans are the only naked ape. It has been suggested that humans lost their hair because they needed to sweat while chasing game on the savannah. A possible explanation for the male of the species but the female? After all, according to the game-chasing hypothesis, they would be sitting back at base looking after the children. The aquatic theory suggests the alternative view that the hair was lost, and bi-pedal gait established, during a water-based phase of our evolution. The theory was rubbished by the scientific community and so Elaine decided to write the book that she wanted to read. The Descent of Woman argued that human evolution is not driven by men, but by both sexes. In addition to promoting the aquatic theory it focussed upon female evolutionary development and became an international bestseller. The aquatic ape theory and her book’s popularity among feminists, together with her lack of formal scientific training, fostered the idea that she was something of a crank. Elaine Mogan was not to be deflected from her belief in the theory and took on board critisisms and objections in order to strengthen the theory. Ten years after The Descent of Woman she published The Aquatic Ape. The hypothesis has now gained acceptance among some well-known figures, including Desmond Morris, David Attenborough and Daniel Dennett.