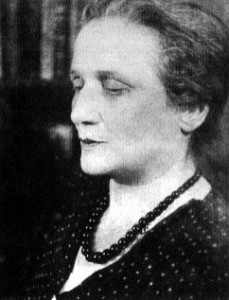 Anna Akhmatova was a Russian modernist poet and one of the most acclaimed writers in the Russian canon. Besides poetry, she wrote memoirs, autobiographical pieces and literary criticism.

Born into an upper-class family in Odessa and brought up in a glamorous suburb of St. Petersburg, Anna was the third of six children. Her mother belonged to a powerful family of landowners, while her father inherited title as hereditary noble.
Anna Gorenko took the pen name Akhmatova, the name of her maternal great-grandmother, as her father told her not to shame the family name by becoming a “decadent poetess”. Anna attended law school in Kiev, where, after repeatedly rejecting his attentions, she married fellow poet Nikolai Gumilev. The couple spent their honeymoon in Paris, where Anna met the painter Modigliani, who wrote many letters to her and made sixteen drawings of her naked, one of which she hung above her sofa wherever she lived.

Shortly after the marriage, Nikolai travelled to Abyssinia, leaving Anna behind. When their son, Lev, was born he was raised by his paternal grandmother, and Anna visited only during holidays. This is not the only way in which Anna and Nikolai were an unconventional couple. They lived separately for most of the time and Anna had several affairs during their brief marriage. Boris Paternak, who was himself married to another, proposed to he many times.

When her first book, Evening, was published Anna became a cult figure among the intelligentsia. The small edition of 500 copies quickly sold out and she received around a dozen positive notices in the literary press. Her second book, Rosary established her reputation further. Thousands of women composed poems “in honour of Akhmatova”, mimicking her style and prompting her to comment, “I taught our women how to speak, but don’t know how to make them silent”.

Although Anna and Nikolai divorced she was still associated with him and, following his execution by the Bolsheviks, she had great difficulty finding a publisher for her work. In practice, there was an unofficial ban on her poetry from 1925 until 1940. Instead Anna devoted herself to literary criticism, particularly of Pushkin. During the Stalinist purges of the 1930’s Anna had little food and almost no money; Lev was denied access to study and her close friend and fellow poet Mandelstam died in a Gulag labour camp. Although Anna herself was never arrested, though Lev was imprisoned many times. She would often queue for hours to deliver him food packages and plead on his behalf. He was arrested again in 1949 and held in jail until 1956. In an unsuccessful attempt to secure his release, Anna composed poems in praise of Stalin, although she later requested that these poems not appear in her collected works.

Despite the opposition to her work by the Russian authorities she was deeply loved by the Russian people. In February 1917, the start of the revolution, when her friends died around her or left for the safety of Europe and America, Anna chose to stay.

During World War II, she witnessed the Siege of Leningrad, where she lost many friends. On returning to Leningrad, having been evacuated to Tashkent, she wrote of “a terrible ghost that pretended to be my city”

In 1964 she was awarded an honorary doctorate from Oxford University and two years before her death she was elected president of the Writers’ Union. Anna died in Leningrad, aged 76. Thousands attended the two memorial ceremonies which were held in Moscow and in Leningrad. After being displayed in an open coffin, she was buried at Komarovo Cemetery, St Petersburg.

I won’t beg for your love.
It’s safely laid aside….
I won’t be penning jealous
Letters to your bride.

But be wise, take my advice:
Give her my poems to read,
Give her my photos beside –
Be kind to the newly-wed!

And when you’ve spent all your
Kopecks of joy with your dear friend,
And your spirit’s sated with it all,
And suddenly you’re ashamed –
Don’t come – I’ll fail to know you –
To me, night’s crestfallen guest.
For how could I help you?
I’ve no cure for happiness.

(Translated by A. S. Kline © 2005, 2012 All Rights Reserved.)
This work may be freely reproduced, stored, and transmitted, electronically or otherwise, for any non-commercial purpose.)