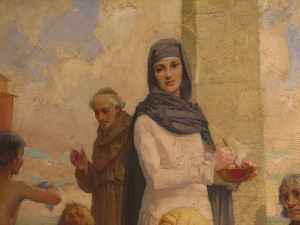 When I think of St Hilda, which admittedly isn’t often, it is as the Oxford College which hosted the best student discos of the 1980’s! In fact, St Hilda was an important figure in the conversion of England to Christianity and recognized for the wisdom that drew kings to her for advice.

According to the Venerable Bede, Hilda was born in 614. Hilda’s father was Hereric, the nephew of Edwin the future king of Northumbria. Her mother was Breguswith, a Celt. Following her father’s death and the creation of the Kingdom of Nurthumbria, Hilda was brought up at King Edwin’s court. Edwin’s second wife was a christian and a couple of years after the marriage King Edwin and his entire court, including the young Hilda, was baptised into her faith.

When Northumbria was overrun by the pagan King of Mercia, King Edwin fell in battle and Hilda and Edwin’s widowed queen returned to her former home in Kent. Little is known about her time in Kent, (some say that she married and was widowed), until at the age of 33, Hilda returned to Northumbria to live as a nun.

Hilda’s original convent was on the north bank of the River Wear and while nothing now remains of that monastery it is possible that it is sited under the monastery built by Benedict Biscop in 674. Here Hilda, under the influence of Bishop Aidan of Lindisfarne who had asked her to return to Northumbria, learned the traditions of Celtic monasticism.

After a year Aidan appointed Hilda as the second Abbess of Hartlepool Abbey. Hilda succeeded Hieu, the first Northumbrian female to be consecrated to the religious life by Aidan.

Aged 43 Hilda became the founding abbess of Whitby Abbey, where she remained until her death. Under her patronage Whitby became the foremost centre of learning in Britain and the world.

Bede describes Hilda as a woman of great energy, who was a skilled administrator and teacher. She gained such a reputation for wisdom and Bede wrote that, “All who knew her called her mother because of her outstanding devotion and grace”. She was also responsible for nurturing the talents of a humble cowman called Caedmon who became England’s first poet and his verses are responsible for spreading the faith out from Whitby Abbey.

In the later years of her life Hilda suffered from a fever but worked up to her death at the age of 66, a great age in those days. Hilda planned to end her days at a new priory she had built at Hackness but she died in Whitby. Legend has it that at the moment of her death the bells of the monastery of Hackness tolled and a nun claimed to have witnessed Hilda’s soul being borne to heaven by angels.

Hilda is celebrated here as one of the patron saints of learning and culture.