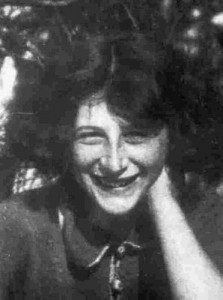 Simone Weil was a French philosopher, mystic and political activist. Her writing emphasized sacrifice and martyrdom through an ascetic lifestyle, a lifestyle which led to her early death from tuberculosis exacerbated by malnutrition aged just 34. Her compatriot Albert Camus described her as, “the only great spirit of our time”.

Weil was born in Paris, her parents both being Alsatian Jews who had moved to Paris after the annexation of Alsace-Lorraine by Germany. Her parents were not practising Jews and it was a secular household and she was raised in agnosticism. Simone was a studious and brilliant child, for example she as proficient in Ancient Greek by the age of 12. From an even younger age she empathised with others, often at her own expense. When the first world war was declared she was just 5 and, when she heard that the rations of French soldiers did not include sugar, she chose to forego sugar herself in support. In 1928 she was successful in gained admission to Lycée Henri IV, finishing first in the exam for the certificate of “General Philosophy and Logic”; Simone de Beauvoir finished second.

In her late teens Simone became involved in the workers’ movement and, while after her graduation became a philosophy teacher, she continued to devote herself to political activism. She gave support to unemployed workers and protested unfair labour practices. In 1933, she was engaged with the general strike of French workers. Again she insisted on living the same life as those she supported; managing without heat in her rooms and eating very little in support of workers who she believed had very little. When she was 25 she decided to take a sabbatical but, rather than taking a break in a beautiful part of the country, she enrolled in a car factory acting on an impulse to experience a non-intellectual life. She became critical of Marxism, pointing out that Marx had never worked in a car factory!

In 1932, having visited Germany to help communist activists there, Simone was one of the first to realise the danger that the rise of fascism posed to Europe. In common with most European intellectuals, her peers felt that Germany would continue to be controlled by centre-left parties and when Hitler rose to power Simone spent much of her time trying to help German communists to escape the country.

In 1936, having previously embraced pacifism, she went to Spain to support the Republicans in the Spanish Civil War. Having tried and failed to join a mission as a covert agent, she joined a French-speaking section of the anarchist militia which specialised in commando style raids. As well as being short-sighted she turned out to be clumsy and, having burned herself while cooking, had to leave the unit.

Despite being brought up in a secular, agnostic household and writing that nothing could be known about the existence of God, she embraced Christianity after having a series of mystic experiences; during one of which she claimed to have experienced the divine by being possessed by Jesus. Following this experience her writings became more mystical and spiritual. But Simone was also interested in other traditions; the Greek and Egyptian mysteries, Hinduism (she learned Sanskrit after reading the Bhagavad Gita); and Mahayana Buddhism. She sought a universal thread to spirituality as well as a way to discover a wisdom of transcendence.