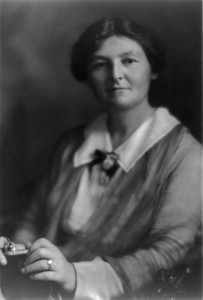 Margaret Bondfield was a Labour politician, trades unionist and women’s rights activist who became the first female cabinet minister and the first woman to be a privy counsellor.

Margaret was born in Chard, the tenth of eleven children. Her father was a lacemaker and political activist. The family was a poor one and aged just 14 Mary left home and began an apprenticeship at a draper’s shop near Brighton.

When Margaret had completed her apprenticeship, she worked as a living-in assistant in a succession of stores. She quickly encountered the realities of life for the shop staff: unsympathetic employers, very long hours, appalling living conditions and no privacy. Margaret, in common with other shop girls, was expected to work between 80 and 100 hours a week for 51 weeks in the year. Margaret joined the National Union of Shop Assistants when she was twenty-one and reported on the appalling work and living conditions of shop girls. Her accounts of the squalor and exploitation she encountered were published in articles under the name “Grace Dare”. By 1898, she was the union’s Assistant Secretary.

The Shop Hours Act made some provision for limiting opening hours and in 1907 the first steps were taken to end the Victorian “living-in” practice, which at the time still affected two-thirds of Britain’s 750,000 shopworkers.

Margaret also became occupied with the wider issue of women’s suffrage. However she did not join the newly formed Women’s Social and Political Union (WSPU) as she did not agree with them that the vote for women should be secured on the same restricted basis that it was given to men. At that time the the vote was only given to men that owned property and so largely excluded the working class. Margaret, therefore, came out in support of the Adult Suffrage Society (ASS), which campaigned for universal adult suffrage, men and women alike, regardless of property.

Margaret help to found the Women’s Labour League (WLL), whose principal aims were “to work for independent labour representation in connection with the Labour Party, and to obtain direct labour representation of women in Parliament and on all local bodies”, and the National Federation of Women Workers. She also she worked with the Women’s Co-operative Guild on maternity and child welfare issues.

In 1923 Margaret decided she could achieve more for working women by entering parliament and was elected as MP for Northampton. With the collapse of the government Margaret lost that seat but was soon adopted as the Labour candidate for Wallsend, which she won at a by-election. The following year, she became the first woman to hold a ministerial post, as parliamentary secretary to the Minister of Labour. In 1929, she became Minister of Labour making her the first woman cabinet minister. Her period in office was dominated by the issue of rising unemployment and the consequent increasing costs of benefit, which created a division between the government and the wider Labour movement.

With the collapse of the Labour government in 1931, Margaret lost her seat and returned to her union duties and she never returned to parliament.

Margaret Bondfield had the self-confidence not only to exist but to thrive in a male-dominated world. And more than that, she helped to improve the lives and working conditions of those around her.