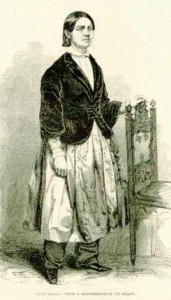 Lucy Stone was a leading activist and pioneer of both the abolitionist and women’s rights movements.

Lucy was born in Massachusetts as the eighth of nine children to parents who were both committed abolitionists.

Even before she attended college, Lucy taught in local schools. When one winter she substituted for her brother she received less pay than him. When she pointed out that she had taught all the subjects he had, the school board replied that they could give her “only a woman’s pay.”

Aged 21, and in defiance of her parents, Lucy enrolled at Mount Holyoke Female Seminary but she withdrew after only one term as she was dismayed by the lack of support for anti-slavery ideas and women’s rights. She then enrolled at Wesleyan Academy and completed a year at the coeducational Monson Academy. When she learned that Oberlin had become the first college in the nation to admit women, and African Americans, Lucy tavelled to Ohio and enrolled at the college.

While at Oberlin, Lucy met fellow suffragist and abolitionist Antoinette Brown.  Lucy and Antoinette were to become sisters in law when Antoinette married Samuel Blackwell, the brother of Lucy Stone’s husband, Henry. Unlike Antoinette, who took the name Blackwell, Lucy Stone continued to use her maiden name after marriage. In graduating Lucy became the first woman from Massachusetts to earn a college degree.

Also while at Oberlin, Lucy met William Lloyd Garrison, whose appeal to circulate antislavery petitions resulted in thousands of signatures being sent to Congress only for them to be rejected, in part because women had sent them. With William’s support and encouragement, started work with the American Anti-Slavery Society. In order to gain public speaking experience, Lucy became a lecturer for the Massachusetts Anti-Slavery Society.
Later in life Lucy helped found the American Equal Rights Association.

The antislavery society brought Lucy into contact with a network of progressive reformers who assisted her women’s rights work. As early as 1836 Lucy began following newspaper reports which addressed the question of a woman’s role in society. In April 1849, Lucy was invited to lecture for the Philadelphia Female Anti-Slavery Society and together with Lucretia Mott held Pennsylvania’s first women’s rights meeting. In 1850 Lucy convened the first national Women’s Rights Convention; an event hailed as a seminal moment for American women. Lucy went on to support suffrage issues across the USA became president of the New Jersey Woman Suffrage Association and launched a New England chapter of the National Woman Suffrage Association.

Lucy Stone also popularised the wearing of bloomers, (see image). The new style of dress, which she had adopted after a period of illness, consisted of a loose, short jacket and a pair of baggy trousers under a skirt that fell a few inches below the knees. Newspapers and the general public had initially praised the new style but support soon turned to ridicule. Many women discarded the style, but Lucy continued to wear the short dress exclusively for the next three years. However, she too abandoned the style and her return to long skirts drew the condemnation of dress-reform leaders who accused her of sacrificing principle for the sake of pleasing a husband.

In 1968, on the 150th anniversary of her birth, the U.S. Postal Service honoured her with a postage stamp; part of the Prominent Americans series.
Until 1999, the Massachusetts State House displayed only portraits of influential male leaders of the state but, thanks to the “Hear Us” project, the portraits of six female leaders, including Lucy Stone, were mounted in the historic building.