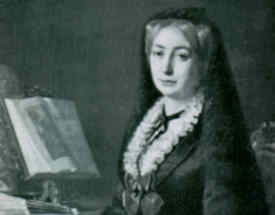 Lady Charlotte Guest was one of the most remarkable women of 19th century Britain; an English aristocrat who published a collection of medieval Welsh tales, The Mabinogion, the earliest prose literature of Britain.

Charlotte was born in 1812 and was daughter to the Earl of Lindsey, who died when she was six years old. Her mother remarried and Charlotte disliked her new stepfather. She was educated by tutors, taught herself Arabic, Hebrew, and Persian, and developed a passion for literature, becoming captivated by medieval history and legends. Aged twenty one, she moved to London and met and married John Guest, who had come to London as Merthyr Tydfil’s first member of parliament. Guest was a wealthy industrialist and owned the Dowlais Iron Company, which was to become the largest ironworks in the world.

Charlotte took an active interest in the business, it’s employees and the wider community in South Wales, She visited local schools and helped them to modernise by introducing new teaching methods and promoted adult education. Charlotte was expert in seven languages and learned Welsh in order to better facilitate the changes. The schools Charlotte and John worked with were said to be “the most progressive in the industrial history not only of South Wales, but of the whole of Britain during the nineteenth century”. They also ensured that workers has clean water piped to their cottages, something taken for granted today but at that time it was still a very new, and expensive, technology.

Charlotte developed a deep love of Wales, it’s history, myths and legends and researched wider Celtic history. Charlotte and John were founder members of the Society of Welsh Scholars of Abergavenny. It was her desire to bring medieval Welsh literature to the attention of a wider public that motivated her translation and printing of The Mabigonion. The first volume was published in 1838 and was instantly popular and widely acclaimed; indeed in the 1877 edition Charlotte pointed out that Tennyson had based his characters Geraint and Enid in The Idylls of the King (the most popular poetic work of the Victorian period) on her translation of one of the Mabinogion tales.

When she was forty years old her husband John died, and Charlotte, then the mother of 10 children, took over the running of iron works, which at that time supplied rails for railways throughout the world. This was a hugely contentious and significant challenge for a woman at the time and led to clashes between her workers and other foundry owners.

Three years later, when she married Charles Schreiber, who had been tutor to her son Ivor, she left the running of the business to others and together they travelled the globe collecting ceramics as they went. The English section of her collection is known as the Schreiber Collection and is displayed at the Victoria and Albert Museum in London. Later in her life, after Charles’ death, she continued to add to her collections, including fans, board games and playing cards, which she donated to the British Museum.

Her interest in socio-economic issues also persisted until her death as she campaigned for diverse causes including Turkish refugees and shelters for London hansom cab drivers.