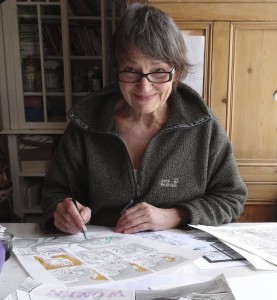 When asked about the shortage of female cartoonists Merrily Harper, freelance cartoonist and writer, said “Being funny is quite a male activity … most women have got better things to do than spend their day thinking up jokes.” I am ashamed to say that, until attending the brilliant “In Conversation with Kate Charlesworth” event yesterday I would not have been able to name a single one.

Yet there are many, many excellent women cartoonists and illustrators. Indeed the most iconic image penned after the massacre at the offices of the journal Charlie Hebdo was drawn by a women, Lucille Clerc..

So while this article has Kate’s name in the title it is a celebration of women cartoonists.

Kate was born in Yorkshire and studied graphics and stage design at Manchester College of Art and Design. Finding stage design too much about dealing with actors and not enough design Kate decided to concentrate on graphics and illustration.

On leaving college she drew a daily cartoon strip called “Twice Nightly” for the Manchester Evening News. Since then Kate has worked as a freelance illustrator for publications including, Gay News, New Scientist (including a regular feature called ‘Life, the Universe and (Almost) Everything’ which almost got her into trouble from Douglas Adams’ publishing house), The Guardian, Pink Paper, The Independent, Scotland on Sunday, and The Times.

Kate’s most recent work is a collaboration with Mary and Bryan Talbot to create the graphic novel Sally Heathcote: Suffragette; which follows the fortunes of a maid-of-all-work swept up in the militancy which surrounded the campaign for Votes for Women. By looking at the events from the perspective of a working woman, rather than from the Pankhursts and other prominent, wealthy protagonists, is a potent reminder that many women were involved in the struggle. And the novel doesn’t shy away from the more violent aspects of the struggle and highlights the very real debate that raged at the time between those who supported militant action and those who urged a more peaceful approach. It is a powerful reminder of the sacrifices women made over a century ago to win the right to vote.

Kate is one many cartoonists, past and present, that deserve better recognition, so do a web search and spread the word.