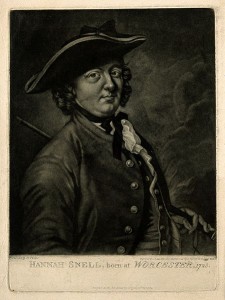 Hannah Snell was born in Worcester in 1723 and at the age of 17, when her parents died, she moved to London and moved in with her sister. Here she met and married a Dutch sailor, James Summs. He abandoned her after only a few months, leaving her pregnant with his child. As soon as she had given birth to the child, who died a year later, she set off after the errant Summs, wearing a suit borrowed from her brother-in-law James Gray, whose name she also commandeered.

According to her own account, she joined John Guise’s regiment, gathered and getting ready to ride to Scotland to counter the Jacobite Rising.
When the regiment arrived in Carlisle Hannah learned that a Sergeant in the company planned to rape a young girl. Hannah warned the girl and the sergeant concerned charged Hannah with neglect of duty, a serious offense that resulted in 600 lashes of the whip. Following this punishment Hannah deserted and headed south to Portsmouth. Here she joined the Marines and set off for the East Indies. She spent 3 years at sea, was involved in an expedition to capture the French colony of Pondicherry and fought in the battle in Devicotta. She was wounded many times and either managed to treat her own wounds without revealing her sex or she may have had help from a sympathetic Indian nurse.

Hearing that her husband had been executed for murder, she gave up her soldiering and returned to London, where she stunned fellow soldiers by announcing that James Gray was really a woman in disguise.

“Why gentlemen, James Gray will cast off his skin like a snake and become a new creature. In a word, gentlemen, I am as much a woman as my mother ever was, and my real name is Hannah Snell”

Her friends encouraged her to make the most of this extraordinary story, which she did by selling her story to the London publisher, Robert Walker, who published it under the title The Female Soldier: or the Surprising Adventures of Hannah Snell. She appeared in uniform on the stage, which caused a sensation across Britain, and soon became a celebrity.

She also requested a pension from the army and petitioned the Duke of Cumberland. He accepted her petition, which detailed all of her adventures, and in November 1750, the Royal Chelsea Hospital officially recognised her military service and granted her a lifetime pension.

On receiving her military discharge, Hannah retired to Wapping and began to keep a pub named The Female Warrior. She married twice more and had two sons. She was living with one of her sons as her mental condition deteriorated, causing her to be sent to Bethlem Hospital, where she died a year later, aged 69.