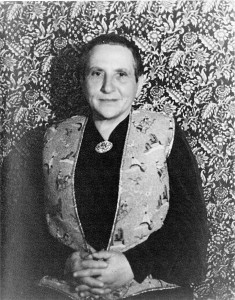 Gertrude Stein was an American author best known for her modernist writings, extensive art collection and for the literary salon she hosted in 1920s Paris.

Gertrude was born, the youngest of five children, in Allegheny, Pennsylvania, to wealthy German-Jewish immigrants. At the age of three, her family moved first to Vienna and then to Paris. Her parents were keen to ensure that Gertrude and her siblings learned of European culture, both English and German were spoken in their home. After a year abroad the family returned to America. She first attended Radcliffe College, where she specialized in Psychology and later studied medicine at Johns Hopkins University, though she did not receive a formal degree from either college. In fact Gertrude did not apply herself to her medical studies and, instead, spent her time taking long walks and attending the opera.

Her reluctance to enter fully into the faculty of medicine may well be due to the fact that men dominated the medical field and that women were not, widely, welcomed. Her writings at that time revealed a depressed young woman who struggled with the paternalistic culture she found at medical school and a woman who realised that she was unable to conform to the conventional female role. In a lecture she gave in 1899 she asserted, in deliberate and characteristically controversial manner, that a woman’s economic dependence caused her to become oversexed, having adapted to the abnormal sex desire of the male, and that rather than being first a human being and then a woman became only a woman.

In 1903, Gertrude moved to Paris and took an apartment on the Left Bank with her brother Leo and a friend Alice B. Toklas, who would remain her partner and secretary throughout her life. Their home was a magnet and sanctuary for many young artists and writers, and coined the phrase “the lost generation” to describe the expatriate writers living abroad between the wars. The apartment, a two-story building with studio, became the home to a collection that had historical importance, including works by Matisse, Picasso, Manguin, Bonnard, Cézanne, Renoir, Daumier and Toulouse-Lautrec.

Her first book, Three Lives, was published in 1909 and the second, Tender Buttons in 1914. The latter was influenced by her love of modern, particularly cubist painting, Henri Matisse and Pablo Picasso were regular visitors to her apartment, with small prose poems, images and phrases being placed together in new and challenging ways. The book received interest and praise from other artists and writers but not from a wider audience. In Tender Buttons, Gertrude comments on lesbian sexuality and the work has many levels of hidden meaning, include in the title itself. While Gertrude and Alice did not have an open, lesbian relationship – Alice being known as her personal assistant – Hemingway described Alice as Gertrude’s wife.

After some time Leo moved to Florence. The split between brother and sister was acrimonious and while Gertrude and Alice remained in Paris together for some 30 years, Gertrude and Leo Stein didn’t meet again, except once and then only by accident, after which they never saw or spoke to each other again.

A conventional autobiography was not Gertrude’s style. Instead she penned an inventive memoir, recording how she and her Parisian friends must have looked to Alice. The Autobiography of Alice B. Toklas is arguably Gertrude’s most famous work. In it the years before World War I are described with wit, while the war and its aftermath are described more darkly.

During World War I, Gertrude bought her own Ford van, and she and Alice served as ambulance drivers for the French.

In 1934 Gertrude undertook a successful, six-month long, lecture tour of America. Such was her fame by that time that a sign in Times Square announced to all that “Gertrude Stein Has Arrived.” Following the visit she returned to France, where she remained throughout World War II, though Gertrude and Alice did move from Paris to a country home that they had previously rented in the village of Bilignin.  Gertrude had been urged to leave France by American embassy officials, friends and family but refused.  Her survival in occupied France,  as a Jew, owes as much to her friendship with Marshal Pétain as to the protection being a famous American offered.  Gertrude continued to praise Pétain even after the war ended, and even after Pétain had been sentenced to death. After the liberation of Paris in 1944, Gertrude was, again, visited by many Americans, including soldiers.

Gertrude died in France from stomach cancer, aged 72. When she was being wheeled into the operating room for surgery on her stomach, she asked Alice, “What is the answer?” When Toklas didn’t reply she retorted, “In that case, what is the question?