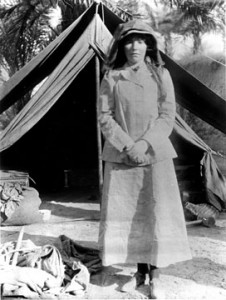 Gertrude Bell was an archaeologist, a linguist and the greatest woman mountaineer of her age, and in Baghdad in 1921 she drew the boundaries of the country that became Iraq.

Gertrude was born in Durham in 1868. Her family was wealthy and well connected. Her grandfather, Sir Isaac Bell, was a member of Parliament who worked alongside Benjamin Disraeli. It was probably this introduction to international matters that encouraged her interest in international politics.

Gertrude studied history, one of the few subjects women were allowed to study at the time, at Oxford and following graduation with a first class degree completed in just two years, she travelled to Tehran, where her uncle worked as a government minister. While in the middle east Gertrude started to record her journeys and her writings did much to inform those back in Britain about this distant part of the empire.

Gertrude spent much of the next decade travelling around the world. She discovered a passion for mountaineering and conquered a number of mountains including the La Meije and Mont Blanc as recorded 10 new paths or first ascents in the Bernese Alps. She gained further fame by surviving 53 hours on a rope on the unclimbed north-east face of the Finsteraarhorn, when her expedition was caught in a blizzard.

She also developed a passion for archaeology and languages, becoming fluent in Arabic, Persian, French and German as well as speaking Italian and Turkish, before returning to the Middle East.

Gertrude worked with the archaeologist Sir William M. Ramsey and their excavations in Binbirkilise were chronicled in A Thousand and One Churches. Later in Mesopotamia Gertrude visited the Hittite city of Carchemish, mapped and described the ruin of Ukhaidir and finally went to Babylon and Najaf.

During the First World War Gertrude worked in France before joining the Arab Bureau in Cairo, Egypt. There, she collaborated with T.E. Lawrence. Lawrence of Arabia, to try to forge alliances with Arab tribes. When British forces captured Baghdad she became involved more closely with the politics of the region and helped colonial authorities install ruler Faisal I as monarch of Iraq. Prince Faisal, a protege of TE Lawrence, had previously been ousted by the French in Syria.

Gertrude was given the title of “Oriental Secretary” and was the only woman present at the 1921 Conference in Cairo, convened by Winston Churchill to determine the boundaries of the Iraqi state. Throughout the conference, together with T E Lawrence, Gertrude worked to promote the establishment of the countries of Transjordan and Iraq and, until her death, served in the Iraq British High Commission advisory group there. Gertrude became a confidante of King Faisal and supported the king at the start of his reign. In return King Faisal helped her to found Baghdad’s great Iraqi Archaeological Museum and to establish The British School of Archaeology in Iraq.

Despite her own achievements Gertrude was not a supporter of women’s suffrage, arguing that the vast majority of her female contemporaries lacked the education necessary to participate in political debate. Indeed in 1908 Gertrude actually joined the anti-suffrage movement.