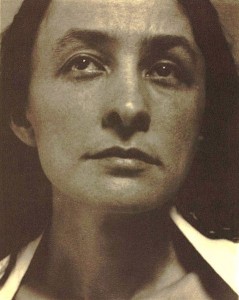 Georgia O’Keeffe, a pioneer of modern art, has been recognized as the Mother of American Modernism. She is best known for her large-format paintings of enlarged blossoms, presenting them in close up, New York skyscrapers the landscapes of New Mexico.

Georgia was born the second of seven children, and grew up on a farm in Wisconsin. She studied at the School of the Art Institute of Chicago and later and at the Art Students League, New York. While at the League she won the prize for her oil painting Untitled (Dead Rabbit with Copper Pot) but straight after that she stopped painting, fearing that she could not make her way with that type of art.

Four years later she took a summer course for art teachers and was introduced to artist and educator Arthur Dow, who’s ideas offered O’Keeffe an alternative to the imitative realism she’d studied previously. She began by experimenting with form, putting large shapes and abstract forms. She then began a series of abstract charcoal drawings that are now recognized as being among the most innovative in all of American art of the period. Via a former classmate, Alfred Stieglitz came to see these drawings, 10 of which he exhibited at his famous avant-garde gallery, 291. This first show was without her permission. When she visited the gallery she asked, “Do you know who I am?” to which he replied, “No”. She said, “I am Georgia O’Keeffe and you will have o take these drawings down” He faced her down insisting that her work needed to be shared with the world.

Stieglitz offered Georgia financial support to paint for a year in New York. By the time she arrived in New York they were in love and later married.
Georgia began to paint large scale works of natural forms, such as flowers, in close up. These images, painted as if through a magnifying glass, were so new and so surprising that natural objects were viewed in a totally new way. While they remained married it was not all plain sailing, including Stieglitz having a very high-profile affair, following which Georgia was hospitalised, taking over a year to recover fully. She felt uncomfortable and self conscious in New York and began to spend more and more time in New Mexico.

Despite he ups and downs, until his death, Stieglitz worked to promote her work, organizing annual exhibitions of her art in galleries across America. By the time she was painting New York skyscrapers she had become recognized as one of America’s most important and successful artists.

After the death of Stieglitz Georgia moved to New Mexico on a permanent basis. Many of the the paintings completed in New Mexico, especially her landscape paintings, have become as well known as her New York work. Her work was often developed as a series, usually of three or four pictures, produced over the course of a year. Some works took even longer and she produced 12 or more variations of the same image.

She was awarded the National Medal of Arts by then President Ronald Regan.

She remained in New Mexico and continued to work up to a couple of years before she died, aged 98, in Santa Fe. Her works can be seen at museums around the world as well as the Georgia O’Keeffe Museum in Santa Fe, New Mexico.