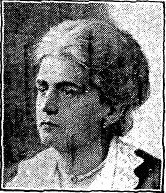 Eleanor Rathbone is a perfect example of why we need the We Are The 51 campaign to celebrate the achievements of women. You may not think you know her name but you will undoubtedly have benefited from her works. Throughout her life Miss Rathbone as she was known, campaigned for better conditions for women and children and, above all, advocated financial aid for parenthood and was instrumental in the creation of the Family Allowances Act.

Eleanor Rathbone was the ninth of ten children born to the prominent social reformer William Rathbone VI and his second wife, Emily Lyle. Despite protests from her mother, Eleanor studied at Classics at Somerville College, Oxford. While at university Eleanor developed a passion for debating and earned a reputation for her strong, clear voice and her ability to clarify complex debates.

Following graduation Eleanor intended to pursue studies in philosophy but instead focussed on social issues and worked alongside her father to investigate social and industrial conditions in Liverpool. In particular, their work led to the publication of a report into the conditions of workers at the Liverpool Docks.

Eleanor was also closely associated with the campaign for women’s rights, indeed the Liverpool Women’s Suffrage Society was established largely through her efforts and later she founded the first Women’s Association in Liverpool to promote women’s involvement in political affairs.

She became the first woman to be elected to Liverpool City Council, serving the Granby Ward as an Independent Councillor. While serving on the council she focussed on the housing problems faced by Liverpool’s poor. Later Margaret was elected as Independent M.P. for the Combined English Universities. During a long and distinguished parliamentary career, Margaret was Chair of the Family Endowment Society, a Member of the Children’s Minimum Council, a member of the Joint Committee for Spanish Relief and Honorary Secretary for the Parliamentary Committee on Refugees.

Prior to World Wat II Eleanor one of the first to see the potential danger that Britain, and Europe, faced from Germany. She was opposed to the British stance towards Hitler’s remilitarisation of the Rhineland, condemning the policy of appeasement. She joined the British Non-Sectarian Anti-Nazi Council and was instrumental in petitioning the Secretary of State for Foreign Affairs to prevent aircraft parts being exported to Germany. After war broke out she became increasingly concerned about the plight of refugees. She organized numerous relief programs and performed many acts of assistance to individuals. Her encounters with Jewish exiles led her to an awareness of Nazi atrocities against Jews and she campaigned for full disclosure of the events of the holocaust.

In 2008 Eleanor was one of six women campaigners honoured in a set of special stamps from Royal Mail.