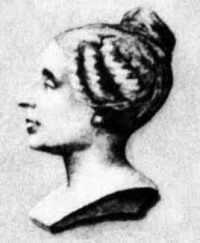 Marie-Sophie Germain was a French mathematician, physicist and philosopher. She battled against the social prejudices of the era and a lack of formal training in order to become a celebrated mathematician.

Her family was quite wealthy, her father was a middle class silk merchant and politician who served in the Estates Général and in the Constituent Assembly, later becoming a director of the Bank of France. Sophie’s interest in mathematics began when she was 13 years old, when the danger on the streets of Paris during the French Revolution confined her to her home and she was forced to spend a great deal of time in her father’s library.

Using the books in the library Sophie began to teach herself mathematics. Her parents felt that this interest was inappropriate for a girl and did all that they could to discourage her. They even went so far as to take away her clothes and depriving her of heat and light at night to make her stay in her bed instead of studying. Sophie would not be deterred and would wrap herself in quilts and use candles she had hidden in order to study at night.

When Sophie was 18 the Ecole Polytechnique was founded in Paris and while women were not allowed to enroll in the academy Sophie was able to obtain the lecture notes for several of the courses and study from them. She was particularly interested in the teachings of J. L. Lagrange and under a pseudonym submitted a paper to him at the end of the term. He was surprised to learn that the author of the paper was female, but recognized her abilities and became her mentor. With Lagrange as a backer, Sophie was able to enter the company of other scientists and mathematicians.

Again using a pseudonym, Sophie began corresponding on number theory with the German mathematician, Carl Friedrich Gauss. Like Lagrange, Gauss was thrilled when he discovered that he was in correspondence not with a man but with a very gifted woman. Much later Gauss would persuade the University of Gottingen to give Sophie an honorary degree, but unfortunately she died before she received it.

While Sophie is best known for her work on number theory she also made great contributions to the understanding of the mathematical laws which underpin the vibration of elastic surfaces and won an award from French Academy of Sciences in the process of her research in this area. In attaining the prize Sophi showed great tenacity. The first time she submitted a paper the prize was not awarded and the competition reopened twice more, with Sophie submitting her ideas on each occasion. The third time she finally won the prize but did not attend the award ceremony for fear of the scandal that might result.

The prize afforded her further access to the prominent mathematicians of the time. She became the first woman to attend the Academy of Sciences’ sessions and was praised by the Institut de France and invited to attend their sessions too. This was the highest honor that could be conferred on a woman.

Sophie maintained her interest in number theory and in 1819 wrote to Gauss outlining her strategy for a general solution to Fermat’s last theorem, which states that there is no solution for the equation xn + yn = zn if n is an integer greater than 2 and x, y, and z are nonzero integers. She proved the special case in which x, y, z, and n are all relatively prime (have no common divisor except for 1) and n is a prime smaller than 100.

She died from breast cancer aged just 55.
At the centenary of her life, a street and a girls’ school were named after her, the Academy of Sciences established The Sophie Germain Prize in her honor and certain prime numbers are called Sophie Germain primes.