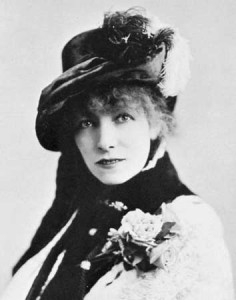 Sarah Bernhardt was one of the most famous actresses of the 19th-century French stage. She had a theatrical career that spanned some 60 years. A career which earned her the name earning the sobriquet “The Divine Sarah”.

She was a fabulous self-publicist; probably the first to embrace celebrity for it’s own sake and was spectacularly sucessful at turning her fame into cash. She never went on tour without her own coffin, in which she slept, and once travelled round America accompanied by a champagne-drinking alligator. And her affairs, including Napolean III and Edward Prince of Wales, made her as famous as her acting and antics. In 1905, while performing in Rio de Janeiro, she suffered an injury to her right leg. By 1911 she was unable to walk unsupported, and in 1915 the leg was amputated. Despite now having an artificial leg, she continued her acting career, even performing at the front during World War I.

What is less well known is her skill as a sculptor.

By the age 25, having established herself on the stage, Sarah began to study painting and sculpture under Mathieu Meusnier and Emilio Franceschi. Bernhardt excelled at modelling. The majority of her sculptures are portraits, though she also made smaller works of art. Fifty of her artworks have been documented, 25 of which still exist.

Sarah also painted, and while on a theatrical tour to New York, hosted a private viewing of her paintings and sculpture for 500 guests.

By 1874, she was exhibiting her work at the Paris Salon, which she continued to do until 1886.

Her most famous sculpture is probably Fantastic Inkwell (Self-Portrait as a Sphinx), in which she depicts herself with bat’s wings and fish tail, with Tragic and Comic masks as epaulettes on the shoulders to symbolise her profession as an actor; below which a horned skull holds the inkwell. 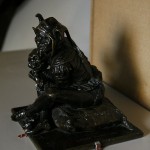 She also made smaller artworks, like The Fool and Death (shown left), a bronze depicting Triboulet in Victor Hugo’s Le roi s’amuse.

In 1876, Sarah submitted a large and ambitious project to the Pais Salon. Après la Tempête (After the Storm) was inspired by a tragic story she had heard and depicts an old Breton woman with the body of her drowned grandson across her lap. Après la Tempête received an “Honorable Mention” at the Salon. 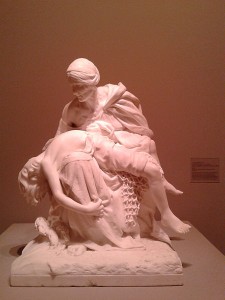 Throughout her life Sarah remained passionate about all forms of art and, in addition to painting and sculpture, she designed dresses, directed a theatre company, and supervised the sets and costumes for her stage productions.
Sarah Bernhardt died following kidney failure at the age of 78.
In recognition of her work on the stage Sarah is commemorated with a star on the Hollywood Walk of Fame.