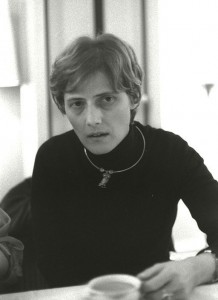 With the Green Party here in the UK making such huge strides, overtaking both UKIP and the LibDems in terms of membership of the party, this is a good time to look at one of the women instrumental in bringing Green issues front and centre in European politics.

Petra Kelly, who was born in Bavaria, moved to America before returning to Germany, was instrumental in founding the German Green Party. As one of the party’s national chairpersons from 1980 to 1982, she achieved fame on the international stage as the German Greens brought environmental politics firmly onto the European political agenda.

Petra first went into politics as a Social Democrat and went to work at the European Commission (EC). After two years she moved to the Economic and Social Committee (EcoSoc), which at that time had women in only six percent of all administrative posts. She used her position to campaign for women’s rights. She became disillusioned with the German Social Democrats and in 1978 she and her partner Gert Bastian created the German Green Party. Four years later, contesting it’s first election, the German Green party recorded over one million votes.

At it’s height, Petra Kelly was one of 28 Green MPs in the Bundestag and was speaker of the party’s parliamentary group, however at the first elections of a reunited Germany her party was badly defeated.

As a member of the Bundestag she promoted organic farming methods, opposed it’s increasing industrialisation and looked to have many pesticides banned. She supported the cause of Tibet, championed non-violent protest and was one of the foremost objectors to any form of nuclear power or nuclear weapons. Petra Kelly encouraged civil disobedience and would herself participate in such actions. She protested at the North Atlantic Treaty Organization (NATO) against the decision to deploy cruise missiles and along with several others was arrested at a protest against the deployment of nuclear warheads to Hasselbach.

She was a powerful communicator saying, ““It will be a great day when our schools get all the money they need and the air
force has to hold a bake sale to buy a bomber.”

Petra also founded and chaired an association for the support of cancer research in children, which she founded after her sister’s early death from cancer.

In 1982 Petra Kelly was awarded The Right Livelihood Award for outstanding vision and work on behalf of our planet and it’s people.

In her own words,
“In a world struggling in violence and dishonesty, the further development of non-violence – not only as a philosophy but as a way of life, as a force on the streets, in the market squares, outside the missile bases, inside the chemical plants and inside the war industry – becomes one of the most urgent priorities.”
Petra Kelly