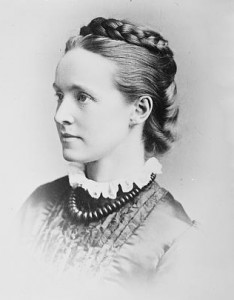 Millicent Garrett Fawcett was a British suffragist, an intellectual, a political leader, a Union leader, a mother, a wife and a writer. As a suffragist she was a moderate but tireless campaigner and concentrated much of her energy on the struggle to improve women’s opportunities for higher education.

Millicent had a privileged background, being born to wealthy parents; her father was a successful merchant and ship owner. She was educated privately and at home her parents encouraged an interest in political issues, freedom of thought and for Millicent to be confident in expressing her own opinion. When her sister Elizabeth moved to London to study medicine, Millicent made regular visits and it was during these visits to London that Millicent developed a keen interest in women’s rights, becoming Secretary of the London Society for Women’s Suffrage when she was just 19. She is known to have been particularly impressed by a speech on the matter by J.S. Mill, who went on to introduce her to many activists, including Henry Fawcett, a liberal Member of Parliament who she later went on to marry. When Millicent gave a speech advocating suffrage, some denounced her action as being especially inappropriate, they said, for the wife of an MP.

Millicent’s political career starting in earnest when she was just 22, at the first women’s suffrage meeting. Millicent, then leader of National Union of Women’s Suffrage Societies (NUWSS) was a moderate campaigner who distanced herself from the more militant activities of the Women’s Social and Political Union (WSPU), led by the Emmeline Pankhurst. Millicent believed that militant actions were harming women’s chances of gaining the vote by alienating both the MPs who were debating the matter and the general public.

Millicent supported many other campaigns for civil liberties. Amongst others, she supported the Married Women’s Property Act, campaigned to curb child abuse by raising the age of consent, campaigned to criminalise incest and to end cruelty to children within the family, campaigned to end the practice of excluding women from courtrooms when sexual offences were under consideration, campaigned to stamp out the ‘white slave trade’, and to prevent child marriage. Millicent also campaigned for the repeal of the Contagious Diseases Acts, which required that prostitutes be examined for sexually transmitted diseases, while their male customers were not subject to the Acts and under her guidance the NUWSS formed a relief fund for South African women and children during the Boer war.As part of a government investigation into the use of ‘scorched earth’ tactics against the Boer civilian population, Millicent visited South Africa and reported on conditions in the concentration camps and her report confirmed that many were dying needlessly.

Millicent was also active in supporting the rights of women in accessing higher education, which lead to her becoming one of the founders of Newnham College for Women, part of Cambridge University. She served on the college council and was supported the bid to ensure that women should be able to receive Cambridge degrees.

When the First World War started the NUWSS did not cease activities as the WSPU had. Rather the NUWSS continued to campaign for the vote during the war, pointing out the incredible contribution that women had made to the war effort. Millicent, somewhat naively to our modern eyes, believed that when Parliament saw the effort that women had made towards the successful outcome of the war that they would automatically be granted the vote.

When Parliament did eventually pass the Representation of the People Act, which allowed British women over the age of thirty to vote. Millicent handed over the NUWSS presidency to Eleanor Rathbone, and the organization became the National Union of Societies for Equal Citizenship (NUSEC) and worked for lowering the voting age for women to 21, the same as for men.

Millicent was also a prolific writer, both with her husband and in her own name. Millicent, who’s husband Henry had been blinded in a shooting accident, worked as his secretary, but was also able to pursue her own writing career. In particular she wrote a short book ‘Political Economy for Beginners‘ which ran for 10 editions and 41 years! The Fawcett Library, the location of much archive material on feminism and the suffrage movement in Great Britain, is named after her.

The spirit of Millicent Fawcett lives on today as the Fawcett Society maintains a dedicated focus on advancing women’s equality and rights in modern Britain, working to influence policy and legislation in Westminster on a number of fronts.