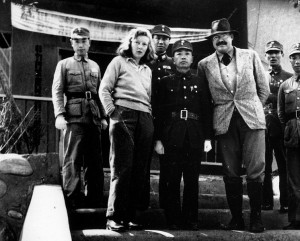 With attacks on journalists making the news today it is fitting that We Are The 51 looks at one of the greatest war correspondents of the 20th century.

Martha Gellhorn was an American novelist, crime writer, travel writer, and journalist and one of the greatest war correspondents of the 20th century, having reported on virtually every major world conflict throughout her 60 year long career. That she was known to many largely because of her marriage, to Ernest Hemingway, caused her unending irritation and she deserves greater recognition in her own right. Martha saw herself as a champion of ordinary people who were caught up in conflicts not of their own making but created by the rich and powerful.

Martha was born in St. Louis, Missouri. Her father was a doctor with progressive ideas and her mother was a suffragist and social reformer. Martha sometimes accompanied her mother to rallies and protests. Martha started out by dropping out of college to pursue a career in journalism and moved to Paris in an effort to become a foreign correspondent. While she was there she encountered the pacifist movement and wrote about her experiences in a novel, What Mad Pursuit. On returning to the United States, Martha was hired by the Federal Emergency Relief Administration, and moved around the country recording the impact of the Depression. Her reports formed the basis of her novel, The Trouble I’ve Seen, and were spotted by Eleanor Roosevelt and the two women became firm friends. Her life as a war reporter began at around this time when she met Ernest Hemingway and traveled with him to Madrid to cover the Spanish Civil War. In typical fashion, she went to Spain with nothing but a knapsack and $50, and covered the conflict for Collier’s Weekly.

When war broke out she travelled to Western Europe to cover the war. Her novel, ‘A Stricken Field’, based on her experiences, is set among refugees in Prague just before the Nazi invasion of Czechoslovakia. She covered the blitz in London and it is said that she stowed away on a hospital ship in order to report on the D-Day landings first hand. At the end of the war she entered Dachau with American troops and her harrowing account of the liberation of the concentration camp was a landmark piece of journalism.

Later still she covered the war in Vietnam and reported on victims on both sides. She continued to travel and reported on the wars in El Salvador, Nicaragua and the U.S. invasion of Panama. In her writings she always focused on ordinary soldiers and civilians, ignoring the generals.

Towards the end of her life she went to Brazil to write about street children.

When Martha decided that she could no longer live in the United States, she moved from Cuba to Italy to Mexico to Kenya until she settled in Britain. She spent her last years between a small cottage in Wales, an apartment in London and the world’s trouble spots. Her South Kensington apartment became a kind of salon for writers and foreign correspondents.

Suffering from cancer, Martha took her own life. The last word goes to Bill Buford, past editor of Granta, ‘Reading Martha Gellhorn for the first time is a staggering experience. She is not a travel writer or a journalist or a novelist. She is all of these, and one of the most eloquent witnesses of the 20th century.’