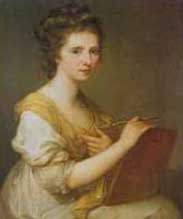 Maria Winkelmann was one of the most famous of the early female astronomers in Germany . Born in 1670, she was educated by her father,  who believed that she deserved an education equivalent to that given to young boys of the time, her uncle and from a nearby self-taught astronomer, Christopher Arnold.

When she married Gottfried Kirch, Prussia’s foremost astronomer she became his assistant at the observatory  in Berlin. Maria and Gottfried worked together as a team, though Maria was mainly seen as his assistant rather than equal. However Maria did make solo observations, and she discovered Comet 1702, thus becoming the first woman to discover a comet. The comet was not named after her as was the case with most newly discovered comets, Gottfried instead taking credit for its discovery. Though he did later acknowledge her discovery the comet never had her name.

When  Gottfried died she applied for a position as assistant astronomer at Berlin Academy, for which she was highly qualified. As a woman – with no university degree – she was denied the post. Members of the Berlin Academy feared that they would establish a bad example by hiring a woman! Maria did have the support of world famous astronomer, then president of the academy, Gottfried Leibniz, but even he couldn’t persuade the Academy to employ Maria.

She went on to publish  her findings concerning Jupiter and Saturn, a blend of astronomical calculations, astrological material and almanac, before finding a new patron, Baron von Krosigk, who was a keen amateur astronomer. She began work in his observatory and trained her son and daughters to act as her assistants.

Later, when Maria’s son Christfried became the director of the Berlin Observatory, Maria and her daughter, Christine, became his assistants. Once again Academy members objected to her presence and complained that she took too prominent a role and demanded that she behave like an assistant. When Maria refused to do this she was forced to retire, which meant that she also had to leave her home which was sited in the grounds.

When Maria died her three daughters continued her work and assisted their brother in his position as master astronomer.