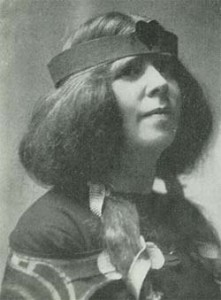 When considering the “Glasgow Style” it is common to cite Charles Rennie Mackintosh, and it is true that his architectural works brighten Glasgow even today, but his wife Margaret MacDonald Mackintosh is one of the “marginalized wives” so common in a world more likely to see a woman artist as supporter or muse. Margaret was skilled in a many different media such as watercolour, metalwork, embroidery and textiles, and can reasonably be considered as one of the most talented artists of early 20th Century. Her artistic work and creativity is on a par with her husband but her fame lags far behind, making Margaret the prefect nomination for We Are The 51.

Margaret was born near Wolverhampton, the daughter of an engineer, and later, when the family settled in Glasgow, Margaret and her sister Frances enrolled as students at the Glasgow School of Art. This was the first time that women had been allowed to attend day classes at the Glasgow School of Art and Margaret and Frances, along with Jessie Newbery, Ann Macbeth and Jessie M. King became known as The Glasgow Girls and were instrumental in the evolution of decorative and interior design, a design that became known as the ‘Glasgow Style’. Margaret and Frances early work together was controversially labelled “Spook” art because of its unusual symbolism and spiritual influences.

It was Francis Newbery, Jessie’s husband and then head of Glasgow School of Art, who introduced Charles Rennie Mackintosh and his friend Herbert MacNair, to the MacDonald sisters. Newbery had noticed similarities in their style of work and encouraged them both to collaborate and to exhibit. Together they became known as The Glasgow Four. Herbert MacNair and Frances married in 1899 and Mackintosh and Margaret married the following year. Together they set out to provoke stuffy Victorian society with their art, which shockingly celebrated the relationship between sexuality and the forces of nature.

Charles and Margaret were from vastly different backgrounds; Margaret had travelled widely throughout Europe and spoke both French and German while Charles was a boy from the tenements. Margaret and Frances and their friends dressed as they pleased and behaved in a Bohemian manner. They were fans of the influential Aubrey Beardsley and read the plays of Oscar Wilde. To the impressionable young Mackintosh these women and their lifestyle must have been a revelation. He broke off his engagement and started a relationship, both personal and working, with Margaret.

In her own name, Margaret contributed to more than 40 exhibitions throughout Europe and America and was celebrated in her time by many of her peers including her husband who, in 1927, said,
“You must remember that in all my architectural efforts you have been half if not three-quarters of them.”
Eminent curators bought her work and she was awarded numerous prizes in collaboration with her husband.

It is clear that Margaret’s art was highly influential on Charles and their individual roles and contributions as artist and designer became blurred once they began to collaborate. Together they worked on a series of interiors and Margaret was unquestionably involved in the shaping the look and feel, as well as producing decorative gesso panels for each interior.

At that time in Glasgow tea-rooms were becoming increasingly popular. These were not the cosy, quaint places they are today but rather they were meeting places for intelligent, avant-garde thinkers. A leading figure in this development was Miss Catherine Cranston and she became a major patron of Margaret and Charles.

Margaret’s best-known work is probably The May Queen, now on display in the Kelvingrove Museum in Glasgow, along with The Wassail by her husband Charles, both of which were designed for Miss Cranston’s Tearooms.

When Charles won the competition to design the now famous buildings of the Glasgow School of Art, Margaret continued to work with her sister Frances. Together the sisters opened a studio in Glasgow and their early work, especially Margarets work The Opera of the Winds influenced Gustav Klimt.

The publisher Walter Blackie commissioned the Mackintoshs to design a family home in Helensburgh and since the Blackie family fortune was based on publishing fairytales Margaret used these as an influence in the design for the interior of The Hill House. Margaret also worked closely with Charles on designs for the House for an Art Lover which stands in Bellahouston Park, Glasgow.

Poor health cut short Margaret’s career and she died aged 69, five years after her husband.
Charles believed that Margaret had genius, whereas he had only talent – a fitting tribute to a woman who deserves much wider praise.