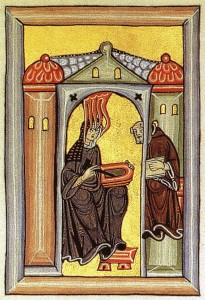 How is this for an introduction – Saint Hildegard of Bingen was a German writer, composer, philosopher, Christian mystic, Benedictine abbess, visionary, and polymath. Quite a biography for someone who most of us have heard little about.

Hildegard of Bingen was born in 1098, the century of Eleanor of Aquitaine – another heroine of mine thanks to the wonderful portrayal by a third heroine, Katherine Hepburn in the wonderful film The Lion In Winter. Hildegard is one of the most important figures in the history of the Middle Ages, and thought by her admirers to be the greatest woman of her time.

Hildegard was the daughter, and tenth child, of a knight and when she was just eight years old sent away to a Benedictine monastery to be educated. She was placed in the care of an older nun Jutta, and probably assisted her in reciting the Psalms, working in the garden, and tending to the sick. When she was eighteen, she became a nun herself and later, on Jutta’s death, was elected head of the female community at the monastery. When the community grew too large for their existing monastery Hildegard moved them to Bingen.

Her surviving works include more than a hundred letters written on her travels throughout Europe.

Recently there has been great interest in her music. She wrote 72 songs including a play set to music, Ordo Virtutum, which tells of one who moves from virtue and then returns to the path of righteousness and is viewed as one of the first morality plays. In addition to the Ordo Virtutum, sixty-nine musical compositions, each with its own original poetic text, survive, and at least four other texts are known, though their musical notation has been lost. This is one of the largest repertoires among medieval composers. Hildegard’s many liturgical songs were collected into a cycle called the Symphonia armoniae celestium revelationum, the songs being set to Hildegard’s own text.

Further she wrote 70 poems and 9 books, two of which deal with the workings of the human body and the properties of various herbs. The firstbook, Physica, focusses on the scientific and medicinal properties of various plants and animals while the second Causae et Curae is an exploration of the human body and the causes and cures of various diseases. These writings came from her experience helping in both the monastery’s herbal garden and the infirmary. In addition she likely gained knowledge through reading in the monastery’s library. Hildegard became well known in her time for her healing powers, including the practical application of tinctures, herbs, and precious stones. Due to her natural view of healing Hildegard has become a figure of reverence within the New Age movement.

Her major works, however, are three books which deal with theology and with her visions: Scivias (“Know the paths!”), Liber Vitae Meritorum (on ethics), and De Operatione Dei (“On God’s Activity”). Her visions, the onset of which she places in early childhood and which may have contributed to her parents sending her away to the church, began proper when she was head of the monastery. At the age of 42, she received a vision which she believed to be an instruction from God to “write down that which you see and hear. Accordingly she devoted the years between 1140 to 1150 to writing her visions down and commenting on their interpretation and significance. Her use of parable, metaphor, symbols and visual imagery makes accessible to many.

When viewed today Hildegard of Bingen may not appear to be a revolutionary but in her time she was. She exercised considerably more authority than most women of her time and she celebrated feminine community and beauty in her spiritual writings. In her medical writings she included topics which male writers usually did not, such as how to deal with menstrual cramps.

Hildegard has been recognized as a saint by branches of the Roman Catholic Church for centuriesand on 7 October 2012, Pope Benedict XVI named her a Doctor of the Church.