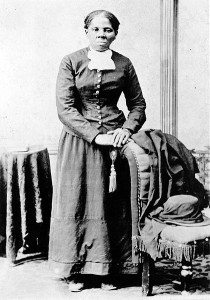 Harriet Tubman was an African-American abolitionist, humanitarian and campaigner for women’s suffrage. Born into slavery, she escaped and subsequently undertook missions to rescue enslaved family and friends.

When she was five or six years old, Harriet was hired her out as a nursemaid and ordered to keep watch on the baby as it slept. If the baby woke up and cried, Harriet was whipped. Even as a child she found ways to resist; running away for five days, wearing layers of clothing as protection against beatings, and fighting back.

Early in her life she refused to help a slave owner to restrain a runaway and suffered a severe head wound when the heavy metal weight which the slave owner had thrown at the runaway hit Harriet instead. After this blow, Harriet began having seizures and would seemingly fall unconscious while appearing to be asleep. These episodes alarmed her family, who were unable to wake her when she fell asleep suddenly and without warning. This condition, possibly temporal lobe epilepsy as a result of the blow to the skull, remained with her for the rest of her life.

Harriet, still a slave, married a free black man named John Tubman. Such marriages were not uncommon at this time as half the black population was free and most African-American families had both free and enslaved members.

Harriet first escaped from slavery with her brothers. Once they had left, her brothers had second thoughts and went back, forcing Harriet to return with them. Soon afterward she escaped again, this time without her brothers. As she herself said, “There was one of two things I had a right to liberty or death; if I could not have one, I would have the other.” Using a network known as the Underground Railroad and with the support of the substantial Quaker community Harriet escaped to Philadelphia.

Harriet was acutely aware that while she was free family and friends remained in slavery. When she learned that her niece Kessiah and her two children were to be sold Harriet travelled to Baltimore. Kessiah’s husband, a free black man, made the winning bid for his wife and while he pretended to make arrangements to pay, Kessiah and their children escaped to a nearby safe house. When night fell they escaped by river to Baltimore, where they met with Harriet who took them to Philadelphia. Harriet was putting herself at great risk in supporting an escape effort as the recently enacted Fugitive Slave Law not only punished abetting escape but forced law enforcement officials, even in states that had outlawed slavery, to assist in their capture. For the next 11 years, mainly during the winter months where the dark nights afforded cover, Harriet returned to Maryland, rescuing some 70 slaves including her three other brothers, their wives and some of their children. She also helped about 50/60 others to escaped to the north by providing specialist instructions. Despite the best efforts of the slaveholders and the authorities, Harriet was never captured, and neither were the fugitives she guided. One of her last missions into Maryland was to retrieve her aging parents.

When the American Civil War broke out Harriet saw a Union victory as a key step toward the abolition of slavery and joined a group of Boston and Philadelphia abolitionists to further the case of the Union. Harriet served as a nurse aiding soldiers suffering from dysentery and smallpox. She became the first woman to lead an armed assault as, when Montgomery and his troops conducted an assault on plantations along the Combahee River, she served as a key adviser and accompanied the raid. More than 750 slaves were rescued in the Combahee River Raid. For two more years, she worked for the Union, tending to newly liberated slaves, scouting into Confederate territory, and nursing wounded soldiers.

In her later years, Harriet worked to promote the cause of women’s suffrage, attending meetings and was working alongside women such as Susan B. Anthony.

Harriet was widely known and well-respected while she was alive and became an American icon in the years after she died and inspired generations of African Americans struggling for equality and civil rights.