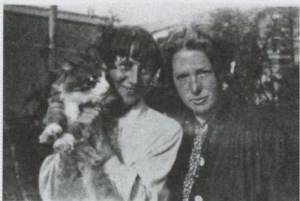 Hannah with Til Brugman

Hannah Hoch, a fate not unknown to women artists where even if artists themselves are more often acknowledged as mere muses, models and tea-makers, has been overshadowed by her male counterparts and all but forgotten. But Hannah Hoch helped to change the course of art.

Hannah was a German Dada artist best known for her work of the Weimar period, when she was one of the originators of photomontage. Since fine arts and sculpture were seen as subjects for men she was steered by her father towards applied arts and first studied at the School of Applied Arts in Berlin under the guidance of glass designer Harold Bergen and later in the graphics class of Emil Orlik at the National Institute of the Museum of Arts and Crafts. At this time Hannah Höch began a turbulent but creatively productive relationship with Raoul Hausmann, a member of the Berlin Dada movement and her own association with the Berlin Dadaists began seriously just after the First World War.

While the Dadaists appeared to support women’s rights it was little more than lip service and they were reluctant to include a woman among their number. Hans Richter, a notable figure in the movement went as far as to describe Hannah’s contribution to the movement as merely the “sandwiches, beer and coffee”. Raoul Hausmann even suggested that she get a job to support him financially. Hannah isn’t even mentioned in the history of Dada in Berlinand numerous exhibitions of Dadaism have failed to include any of her works. Towards the end of her life she herself said,  ‘They (male artists) continued for a long time to look on us women artists as charming and gifted amateurs, denying us any real professional status.’

Hannah found her participation in the Dada Fair of 1920 opposed by influential artists George Grosz and John Heartfield, whom she had considered friends. But participate she did with photographs taken at the time showing her and Hausmann in front of probably her most famous piece, Cut with the Kitchen Knife through the Beer-Belly of the Weimar Republic. While Hausmann has, over the years, received much of the plaudits, it is  clear from comparisons of their work, that the couple developed the photomontage medium in tandem. While their work was similar in style they were very different in subject matter. After leaving college, Hoch had worked for commercial publishers, creating dress and embroidery patterns for women’s magazines and used these materials and the experience she had gained to produce images that gave  insights into the way society constructs women. In her work Da-Dandy cut out images of women are collated to form the figure of a man slumped forwards while works such as Das schöne Mädchen, a visual response to the birth of industrial advertising and ideals of beauty it furthered, set her apart as a pioneering feminist artist.

Indeed many of her pieces resonate as clearly today as they did in post-war Germany as they rebel against the mass culture beauty industry, fashion and advertising photography and the effects that has on body image for women. Many of her overtly political works equate women’s liberation with social and political revolution.

With the decline of Dada Hausmann reinvented himself as a society photographer but Hannah continued to develop as an artist experimenting with embroidery and even leaves and twigs and other organic matter on her collages and taking her work in a more abstract direction.

Hannah died in 1978 but did live long enough to see her work included in major exhibitions celebrating the Dada movement in both Paris and Berlin. Her work is vibrant and relevant and sparked a whole new movement in photomontage. She deserves to be much better known and much more widely applauded.