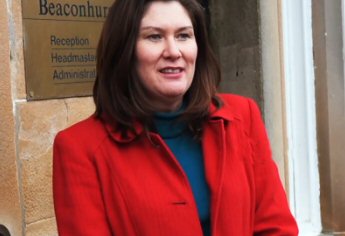 I founded Labels4Kids in 2004 after one of my sons came out of school with one shoe missing!

2014 was a busy year for Labels4Kids. We completed our website build with new developers, we purchased and moved into new offices in Stirling and we took on more staff. Labels4Kids had the office converted from domestic to commercial and had builders in for several months before we could move in. Renovating an 1806 premises was an eye opener but we had the help of our Interior Designer, Jane Nelson Interiors, with that.

Following a pitch to John Lewis PLC in London Labels4Kids became name label supplier to John Lewis stores which was a great contract for us and a validation that moving out of the house after 10 years trying to hold back the bolting horses was worthwhile. I also promoted two of my younger staff into management roles to help grow our company structure and this has now freed me up for more strategic building of our business. New for 2014 has been our personalised gift range and we are now also working in collaboration with Identity Direct, which is a multimillion pound business internationally, so you will see many more products being added to our gift ranges including Nickolodean, Disney and Hasbro ranges. All this is very exciting for the team and for our customers for 2015.

Along with all the Labels4Kids work in progress, Tanya Hine OBE handed the reins of BAWE Scotland (The British Association of Women Entrepreneurs in Scotland) to me as the new Chairwoman back in September 2014. This was a great honour and a difficult act to follow. It has taken a few months to get to grips with what BAWE is all about and what we offer our members. I have been a member of BAWE for 3 years now and I joined as I found that particularly in Central Scotland and Glasgow the was not a lot in the way of a networking group for Entrepreneurs at my level. I was looking for a group where I could compare business problems or ideas and find out things, get advice and also just network about useful contacts. Many networks I have been in over the years either had men who were not interested in talking to someone who ran a sewing shop putting labels on clothes. The interesting thing about that is … we DON’T.

Labels4Kids specializes in name labels but our real specialty area is e-commerce. There are other name label suppliers and there are other personalised gift suppliers. We are very good at e-commerce and we are always trying to stay at the forefront of how we promote and sell our products online. We are so good at this that I was invited by No 10 Downing Street and the Department of Business to London in 2014 to be part of the e-commerce Task Force for Europe with Google, ASOS, M&S, Wiggle, Visa, Microsoft and others. We were the only SME represented and it was very enlightening to hear the same problems coming from the big guys as from my business.

Networking groups, with men in particular, often read my name badge and think we do what it says but they put a feminine twist on it; thinking I have some sewing enterprise one man band! I have had men look at my name label and walk off only to then find out that I am the keynote speaker, or to discover that I have won the international award, Online Retailer of the Year, for 4 years running and a string of other business awards for my business.

I think women network differently to men and that woman appreciate there are many other things that their colleagues are multitasking with whilst running their business, from kids and animals to grocery shopping and cooking, whilst talking about international development deals with the other hand! I still attend the odd men and women networking event but I am quite selective of the audience. I am a member of the Chamber of Commerce and the FSB but do not attend many events.

More about BAWE then. BAWE was actually formed in 1954 an a non-profit professional organization for women entrepreneurs by Tinou Dutry, a young Belgian member of FCEM (Les Femmes Chefs d’Enterprises Mondiales) who was based in London. The first three British delegates were received at the Elysee Palace by M Vincent Auriol, then President of the French Repulic! Today BAWE in the UK is therefore affiliated with a vast international network known as Les Femmes Chefs d’Enterprises Mondiales (FCEM), which was started in 1946 by French Industrialist Madam Yvonne Foinant. FCEM has branches in 30 countries and a worldwide membership of more than 30,000.

BAWE and FCEM provide an environment for women in business and the professions to grow and develop and support each other. BAWE also aims to enhance recognition of the achievements of women in business and the professions. It is committed to the concept that women are well suited to offer solutions for local and global environmental and social issues. This is done by:

The main thing we look for in most of our membership is listed below. I say “most” because our regulations allow us to take a portion of Corporate Directors also as advisors and networkers. Mostly we would like the following people to join us to grow BAWE Scotland:

History and regulations aside, I believe 2015 will see a large change in the activities of BAWE in the UK. Our President in London is about to hand over to a new President with some great ideas on how to grow the UK group to be a larger part of FCEM internationally. As new Regional Vice President I plan to make more of the offering we have in Scotland and promote our name more on social media such as Linkedin and Facebook. We are a membership group that offers a lot for female Entrepreneurs but could offer more in future. The connections you get with Scottish Government and UK Government are invaluable for networking and business growth, as are those with FCEM internationally and with other members. We are affiliated with the British Chambers of Commerce also although we hold no joint events.

April 23rd 2015 will be the 20th Anniversary of BAWE Scotland and we will hold a celebration in central Glasgow for this which you are welcome to attend. In addition we have meetings lined up in Falkirk and Edinburgh for March and June respectively. Previously meeting in Glasgow I noticed that we had a large number of members from central Scotland and we would also like to have more from Edinburgh. I am therefore rotating our quarterly dinners between Glasgow, Stirling, Falkirk and Edinburgh and considering adding Perth later to head further north. BAWE has been a great networking opportunity for me and I know it can be for many other growing female led businesses.

If you are interested in attending any of our events please do contact me at ann-maree@labels4kids.com and I will send more information. You are very welcome to at least 2 events before you need to pay membership to continue attending and we would love to see you.