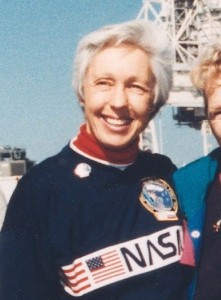 Have you heard of Mercury 13?
No?
I hadn’t until listening to a documentary on Radio 4 recently. Mercury 13 is the name given to the privately funded program, which allowed thirteen women to undergo the same physiological and psychological tests as the astronauts selected by NASA for Project Mercury. Project Mercury was the first human spaceflight program in the United States. It ran from 1959 through 1963 with the goal of putting a human in orbit around the Earth. The women of Mercury 13 were not part of NASA’s official astronaut program, and despite passing the tests, none of the women ever flew in space.

Wally Funk was one of the Mercury 13. She was the first female air safety investigator for the National Transportation Safety Board and the first Federal Aviation Agency inspector.

Wally had always wanted to be an astronaut and volunteered to be a part of the Women in Space Program in 1961. Like the other participants in the space program, she was put through rigorous physical and mental testing. Wally passed all of the tests, including spending over 10 hours in a sensory deprivation tank, and was qualified to go into space. In fact she scored higher than John Glenn, who went on to become was the first U.S. astronaut to orbit Earth.

The Mercury 13 campaigned to have the program reinstated and in 1962 public hearings took place. Significantly, the hearings investigated the possibility of gender discrimination a two full years before the Civil Rights Act of 1964 made discrimination illegal. NASA sent astronauts John Glenn and Scott Carpenter who testified that under NASA’s selection criteria women could not qualify as astronaut candidates. Glenn also stated that “The fact that women are not in this field is a fact of our social order.”

It wasn’t until 1983, two decades later that Sally Ride became the first American woman in space.

Wally Funk was nominated by Karen Birch (www.kebirch.co.uk)
To get involved and sponsor a woman from history who you think deserves greater recognition, click here