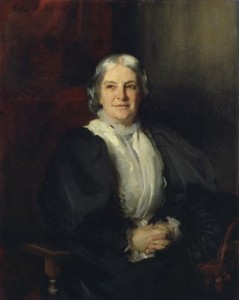 OCTAVIA HILL
In these times of food banks, recession and poverty, and with concerns about how to address our changing, even broken, society,  it is fitting to consider the life of social reformer, Octavia Hill.

Octavia Hill, who was born in 1838, dedicated her life to the welfare of those who lived in cities, especially those who lived in London. Octavia herself was no stranger to poverty, due to the financial failure of her father, and since she had no formal schooling, she worked from the age of 14.

As a social reformer Octavia Hill deserves to be better known, most particularly for her work in social housing. When Hill began her work many people, and Parliament, had been trying, with limited or no success, to improve the housing of the working classes. She found that the landlords of the poorest in society routinely ignored their obligations towards their tenants. She tried to find them new homes, but since there was a severe property shortage she decided that her only solution was to become a landlord herself.

Her first holdings were three cottages in Paradise Place, Marylebone, gifted to her trust by John Ruskin. After making improvements to the houses they were let at affordable rents to the poorest in society. This early example of social housing was based on managing not only the buildings but the tenants; she insisted, “you cannot deal with the people and their houses separately”.

At the heart of the system was the weekly visit to collect rent. She and her assistants combined the weekly rent collection with checking every detail of the premises and getting to know the tenants personally, acting as early social workers. Her methods successfully transformed slum areas and created healthy communities.In addition workers were encouraged to promote tenants’ associations, after-work and children’s after-school clubs. Communal facilities such as meeting halls, savings clubs were established to enhance the lives of tenants.

In a further echo of our current concerns, Octavia Hill was concerned that everyone, not just landowners, should have access to open spaces. In her central vision, that everyone should have holistic fulfilment, Octavia was truly way ahead of her time. When it comes to the preservation of our common land and open spaces, her vision may even be said to be ahead of our time. She campaigned hard against building on suburban woodlands and helped to save Hampstead Heath and Parliament Hill Fields from development and was the first to use the term “Green Belt”. Her concern for the environment was not, however, limited to London, in 1883 she campaigned to stop the construction of railways from the quarries in the fells in Buttermere, Lake District. In her essay  ‘Our common land’, she asserted  that the danger of destruction of open space ‘is imminent because we are all so accustomed to treat money value as if it were the only real value’.  She was determined to make people understand that if land was lost it would be lost forever, not just those enjoying the land right now but for future generations. This work led to the foundation of The National Trust, Octavia being one of the three co-founders, but more than that. Her legacy can be seen in parkland and green spaces in towns and cities, in national and country parks, with the Forestry Commission, in conservation and wildlife movements,  and, in Scotland, the Right to Roam.

Though founded by her sister Miranda, Octavia was the driving force behind the Kyrle Society; which worked to enhance the quality of life in communities with art, books and open spaces. It was the forerunner of all today’s amenity societies and also the Civic Trust.

In addition, Octavia was a founder member of the Charity Organisation Society (now the charity Family Action) and pioneered a home-visiting service that formed the basis for modern social work.

Also in the essay Our Common Land, Octavia gives advice to volunteers about helping people to help themselves, rather than doling out money. A sentiment that again finds relevance in today’s debates.

For her compassion, determination and commitment to improvements in housing and access to the countryside, Olivia Hill thoroughly merits wider recognition.