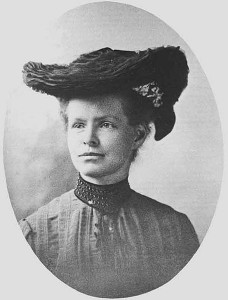 Everyone who studies genetics at school hears of Gregor Mendel and Watson and Crick. Nettie Stevens was an early American geneticist and deserves wider recognition for her work to describe the chromosomal basis of sex.

By careful observation of insect chromosomes she discovered that, in some species, chromosomes are different between the sexes. She observed that females had two large sex chromosomes. This was the first time that differences observed in chromosomes was linked to the physical difference between male or a female.  The larger chromosomes are termed X, with females having two, XX. Males have one large chromosome and one small, termed Y. She found that the males made reproductive cells with both X and Y chromosomes whereas the females made only those with X.  She concluded that sex is inherited as a chromosomal factor and that males determine the gender of the offspring.

Fellow researcher Edmund Beecher Wilson had failed to see this, as he made his observations of chromosomes on tissue taken from the testis. Once Nettie Stevens had informed him of her discovery Wilson reissued his original paper.

Nettie Stevens is also a role model for those who fail to find their path in life immediately. She was 35 when she enrolled at Leland Stanford University, began graduate school four years later and then began working as a research scientist. The next 11 years would be the most productive of her life.

She died of breast cancer in 1912. Following her death, in a fate that is not unknown amongst female scientists, her contribution was belittled. Thomas Hunt Morgan, who was able to use her work to interpret the early genetic results from the Fruit Fly Drosophila, implied in her obituary that she was more of a technician than a scientist.

It is important to encourage more women into scientific disciplines and to fully acknowledge the work of early female scientists, like Nettie Stevens, is a great place to start.