I used to be in the car every Tuesday driving between Perth and Glasgow at the time that Radio 4’s Great Lives was on air. One of those programmes has stayed with me. The person who had come onto the programme to talk about her ‘great live’ was the actor Jenny Agutter. I had no preconception about who she would choose but I was taken aback when she said that she wanted to talk about the physicist Lise Meitner. I could not imagine why Jenny Agutter had chosen this women but by the end of the programme I completely understood and was very glad that she had.

I had never heard of Lise and was intrigued about why she was thought to be ‘great’. She was born in Vienna in 1878 and lived until she was 90, dying in Cambridge. She was at one point known notoriously as “the mother of the atomic bomb” which was completely undeserved. 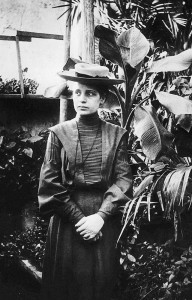 o Hahn she was credited for the discovery of nuclear fusion but was overlooked in 1945 when he was awarded the Nobel Prize for chemistry. Some people believe it was one of the biggest oversights the Nobel committee ever made.

Lise studied at the University of Vienna (she was only the second woman in Austria to be awarded a doctorate) and later at the Max Planck institute. In the summer of 1938 she moved to Stockholm as although she had in earlier years converted to protestantism, she was Jewish. Up to this point she had been collaborating with Hahn and others but she was now working alone, although still in contact with Hahn. As their work developed it was she who came to understand the potential to create an amount of energy which had previously been thought inconceivable. This was brought to the attention of the Americans who then set up the ‘Manhattan’ project and within six years the atomic bomb was created.

Meitner was devastated that the work that she had been involved in was to be used for such ends and would not take part in the project. She was horrified by what happened at Hiroshima.

She did carry on with her work and was responsible for one of the first nuclear reactors to be made after the war.

Albert Einstein called the respected Viennese pioneer in nuclear physics “our Madame Curie.” Yet for several years she was not allowed into the laboratories of the Berlin Institute for Chemistry where she worked, unpaid, as a research scientist (1907–1912). Apparently the powers that be decided that it was best not to let women in “lest their hair catch fire.”

It took until the 1960s for her work to be recognised although she had written numerous papers and been a member of the UN committee on atomic energy. In 1992 she had the element meitnerium named after her.