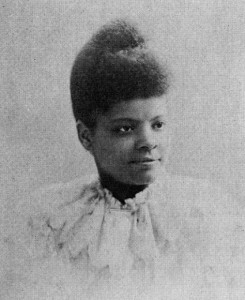 Rosa Parks,  “the first lady of civil rights” and “the mother of the freedom movement”, is rightly famed for her role in bringing about racial equality in the United States,  but  71 years early Ida B Wells made her mark.

Ida Bell Wells-Barnett was a journalist, suffragist and an early leader in the civil rights movement. On May 4, 1884, a train conductor with the Memphis & Charleston Railway ordered Ida to give up her seat in the first class ladies car.
She refused and the conductor, along with another two men, dragged her out of the car. When she returned to Memphis, she hired an African-American attorney to sue the railroad. She won her case and was awarded $500, though the ruling was later reversed when the railroad company appealed the decision.

The reversal did not stop Ida and after the murder of her friends, lynched while in jail following disturbances at a store owned by one of the victims, she began to research and to document lynchings and their causes and officially started her anti-lynching campaign. She showed that blacks were lynched for such reasons as failing to pay debts, not appearing to give way to whites, competing with whites economically, and being drunk in public. She published her findings in a pamphlet, “Southern Horrors: Lynch Law in All Its Phases” and in retaliation a mob destroyed her offices.

Despite threats to her life, which caused her to move from Memphis to Chicago she continued with her anti-lynching campaign and continued to write columns attacking Southern injustices. While in Chicago, together with other black leaders, she organized a black boycott of the 1893 World’s Columbian Exposition, for its failure to collaborate with the black community on exhibits representing African-American life.

At a time when we are debating the right to have the mother’s name on marriage certificates, it is interesting to note that when Ida married Ferdinand Barnett she became one of the first married American women to keep her own last name along with her husband’s. In another echo of modern life, after having her second child, Ida stopped her work as she couldn’t balance her work-life with her family-life.

Ida B Wells, though herself born into slavery, throughout her life demanded equality and justice for African-Americans.