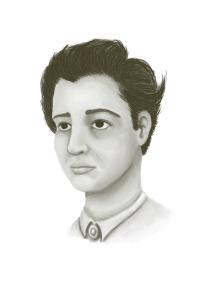 HANNAH ARENDT
Hannah Arendt was a German-born political theorist. An assimilated Jew, she escaped Europe during the Holocaust and became an American citizen. Her works deal with the nature of power, and the subjects of politics, direct democracy, authority, and totalitarianism.

Although Hannah is widely respected, The Hannah Arendt Prize for Political Thought being awarded annually in her honour, she is not as well known as her male colleagues and at a time when the political life is under scrutiny here in the UK she deserves a wider audience. Her writings cover totalitarianism, revolution and the nature of freedom, all topics which are as relevant to life in the early 20th century as they were when she was at her most prolific.

Hannah was born into a secular family of German Jews in Hanover and brought up in Konigsburg. After studying in Heidelberg Hannah was prevented from teaching in German universities because she was Jewish. She researched anti-Semitism for a time before being arrested and briefly imprisoned by the Gestapo before fleeing to Paris. In 1941, after a period of internment by the Vichy regime, she left, with her husband and her mother, for the United States, where she lived until her death in 1975.

Throughout her life her writing explores themes such as the possibility of a humane and democratic public life, the forces that threaten such a life, conflict between private and public interests, and intensified cycles of production and consumption. In her most influential work, The Human Condition (1958) she is fundamentally concerned with the problem of reasserting politics as a valuable strand of human action, She argues that, while human life always evolves within societies, the social-being part of human nature, political life, was intentionally constructed by only a few of these societies as a space for individuals to achieve freedom through the construction of a common world.

In 1963, having attended the trial of Adolf Eichmann, Hannah published a series of articles in the New Yorker. In them she put forward her notion of “the banality of evil” i.e. “evil deeds, committed on a gigantic scale, which could not be traced to any particularity of wickedness, pathology, or ideological conviction in the doer”. Hannah argued that rather than being the embodiment of a special kind of evil Eichmann was “terrifyingly normal”; not a monster but a mindless bureaucrat motivated by personal ambition rather than anti-semitism. She argued that deeds could be monstrous without the doer of those deeds being monstrous.

Her assertion was that anyone could do evil depending on the circumstances they found themselves in. Whether you agree with her or not, in these times where we see beheadings and atrocities from around the globe it is worth considering the reasons people may commit acts of great evil rather than taking the route that these individuals are simply monsters.

Hannah Arendt also asserts that thinking is the path toward a reinvigoration of politics. The words she wrote, “Why did I wake since waking I never shall sleep again,” resonate in the aftermath of the referendum in the UK where many women who up until 2014 had little interest in politics now are thinking for themselves and refusing to get back in their box.

And, with Russell Brand exploiting his status as a minor celebrity to urge revolution, and with many of my parents generation looking back fondly on the student protests of the 1960s, it is worth pointing out that Hannah saw political violence as a sign of the decline in power. As she wrote, “Violence can destroy power; it is utterly incapable of creating it.”